President Obama to host Fireside Hangout on Google+ this Thursday 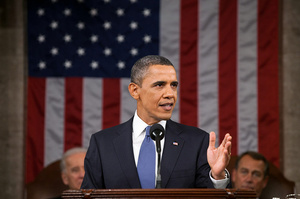 President Obama to follow VP Joe Biden by hosting Google+ Hangout.
The President will deliver his State of the Union address to a joint session of Congress and the American people on Tuesday evening, continuing a 200 year tradition. Ex Presidents and their staff would typically then be grilled about the speech for a few days afterwards by the media, and the Obama administration will be no different.

On Thursday however, President Obama will subject himself to questions in a Google+ Hangout session at 4:50pm ET. Like VP Biden's Hangout, the President will be joined by a group of people who regularly discuss important issues of the day online. Americans will also be able to submit questions or thoughts to the President by going to the White House YouTube channel and submitting a questions (text or video).

The President's State of the Union address will also be broadcast live on YouTube, from 9pm ET, as will the response from the Republican Party via Senator Marco Rubio.

The Fireisde handout with President Obama can be watched on the White House Google+ page or the White House YouTube channel.
Tweet
Tags: Google YouTube president obama
<Australia to grill Apple, Microsoft and Adobe on high prices >BlackBerry Z10 comes to U.S. early for $999.00
Previous Next
Comments have been disabled for this article.