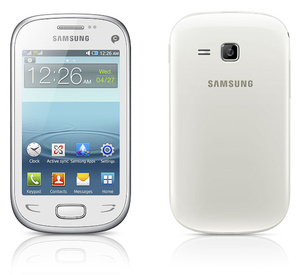 Samsung has announced their new "Rex" line of phones aimed at emerging markets.
The company calls the line "a new series of smart feature phones" and there will be four separate devices with a varying range of specs.

Dubbed the Rex 60, 70, 80 and 90, the phones are all dual-SIM and run on a Java-based OS with Samsung's own TouchWiz UI. The Rex 60 has a resistive touchscreen but the other three have capacitive screens.

"We are committed to developing the best possible mobile solutions to suit all lifestyles and budgets, which is why we are so excited to launch the Rex series across a number of the world's fastest growing markets," added JK Shin, president of the IT & Mobile Communications Division at Samsung.

Each of the phones are expected to sell for between $50 and $100, putting the devices in direct competition with Nokia's Asha phones. Nokia sold 30 million of the phones in 2012, as it remains the top "feature smartphone" maker in the world.

Besides, do they run on ICS or Gingerbread?

asha is a good phone but not so good as a smartphone. i have 311, everything that makes a smartphone smart is super-slow. the call capability is, however, better than that of n8.

Originally posted by PraisesToAllah: A smartphone is a smartphone.

Besides, do they run on ICS or Gingerbread?

This is NOT Android OS. It clearly states Java Java Based OS.

I would stay away from any resistive touchscreen device.
Comments have been disabled for this article.