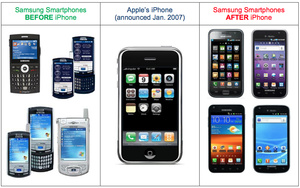 Federal Judge Lucy Koh ruled late last week that Samsung may have been unfairly hit in the patent infringement case against Apple, slashing the damages in the case to $599 million from the previous $1.05 billion.
Additionally, there will be a new trial for the cut balance, which could mean that Apple will walk away with part of the damages.

Koh stated that "the Court identified an impermissible legal theory on which the jury based its award," and was therefore reducing the award.

The judge found that the jury miscalculated the damages, including the time period Apple should be awarded damages for.

While the verdict still stands on all the patent infringement, it is highly unlikely that Apple will get anywhere near the original $450 million awarded. The jury awarded damages for almost 15 months extra than they should have, for starters.
Tweet
Tags: Samsung Apple Damages patent infringement koh reduced
<Xbox Live gets its own exclusive indie film >Bloomberg: Apple iWatch coming before end of 2013
Previous Next

What the hell do you expect? Jury is in California and they don't even know how to add in their iphone calculator which is probably defective.

This is just ridiculous! How much have the lawyers made off this circus already? How much time and money have been wasted in our courts system? Not mention media coverage, lost production, lost sales.

I'm guessing the only reason they lowered the amount was to keep the case going. At this point even if Samsung reversed all charges and didn't file a counter-suit millions upon millions have already been spent on this. All over the shape of a rectangle....

hey, not everyone in California is a Crapple-kid! I think that ruling is horrendous!

And I know plenty of people who don't have iPhones. I mean, after 5 broken screens, most people start to realize that iPhones aren't all they are cracked-up to be! (get it? cracked-up? :D )

Samsung phones are way better and always have been... since before Apple was even making phones...

Still $800 million too high. The litigation should never have been allowed, and apple should be hit with punitive damages for filing the suit.

All this lawsuit stuff is beyond boring now, I agree with Qliphah, 2 phones that do pretty much the same stuff, put the money into development and not into the wallet of the already wealthy overpaid lawyers.

Perosnally, I'm glad that Samsung wasn't penalized that much money cause Apple would've want their 40% markup on their lawsuit effective immediately! Can't lose profit margin now can we?


Chance prepares the favored mind. Look up once in a while and you might learn something. - BLUEBOY
Comments have been disabled for this article.