Recent headlines | Android 11 update tracker - What phones will get it?
AfterDawn > News > International Space Station makes move away from Windows to Linux

International Space Station makes move away from Windows to Linux 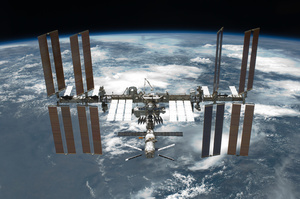 The United Space Alliance, the company behind the computers used on the International Space Station has said today that they have migrated the computers to Linux, and away from Windows XP.
With a parting shot to Windows, the Alliance added, "we migrated key functions from Windows to Linux because we needed an operating system that was stable and reliable."

The "dozens of laptops" will now use Debian 6, while other systems on the Space Station already use RedHat and Scientific Linux.

More specifically, Keith Chuvala of the United Space Alliance said the group needed an OS "that would give us in-house control. So if we needed to patch, adjust or adapt, we could."

The ISS ran Windows? LMFAO! (no, not the band)... I'm surprised the thing is still floating around safely in the heavens, and didn't come crashing down in a fiery ball of BSOD a long time ago. HAHAHAH... this made my day. =)

This is pretty amazing. Though the actual space station doesn't "run" on windows. Just it's laptops.

No Surprise here. Most all casinos run Linux because of the massive amount of computing, more math than a four year college course in a day and pretty much non-hackable. I use Linux "Puppy" and "Tail" alot because they run off your systems memory only. (Via USB flash drives. No HDD needed at all and "Tails" cleans everything when booting down. (Very secure, safe and stable}. Only surprise to me is that it took so long for the ISS to switch over. As a note,I was on the Windows-7 development team and would have to say it is the best ever Windows-OS. I got a new touch screen Win-8 laptop and "Downgraded" to Win-7 right away.
No easy task for the novice without changing the HDD.

the ISS is still floating because they didn't open any windows...lol anyway changing over to Linux is great but why no Ubunto or red hat wow think of all those that go there (ISS) and have learned windows and we changed it on them......

it says it was already using red hat.

But yea, i was suprised to hear there laptops were even using any windows OS. since they cant really do anything with windows, except "use" it. you know how Microsoft is, and Apple ( macs ) are with there systems.

thats good tho, now people can be more reassured that there systems will be more stable and not having to worry about blue screen of death, and lockups and system crashes etc.