Disney to allow livestreaming of broadcast content on iOS devices 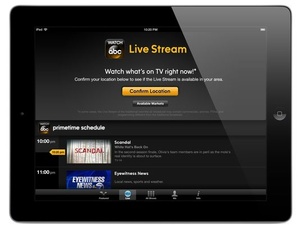 According to sources, Disney will begin allowing livestreaming of ABC broadcast content to iOS devices in NYC and Philadelphia.
If completely accurate, the news would be huge as major broadcasters have never allowed the viewing of live content via mobile devices.

For the first six weeks, the streaming will be free if you have an iOS device but will eventually only be available to paying subscribers of cable and satellite providers.

Dubbed the "Live" button, the company's app will be updated for cities where ABC owns stations, which at this time is only six metro cities. Disney is in talks with the companies that own ABC affiliates, which would give access to fans in 200 other cities.

The streaming will be made available to Android in the coming months.
Tweet
Tags: Disney ABC Livestream
<Alibaba buys major share in China's top auto navigation mapping system >Mega removes 3D gun design
Previous Next
Comments have been disabled for this article.