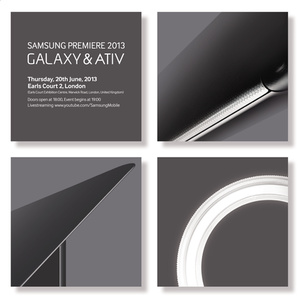 Samsung has sent out press invites for a new event it will be holding in June.
The event, to take place in London, will focus on Galaxy, says the company.

Besides Android phones and tablet, Samsung will also show off Ativ devices, which include Windows Phones, Windows 8 and (possibly) Windows RT tablets and phones and convertibles.

Dubbed "Samsung Premiere 2013," the event starts at 2PM EST and the company will livestream the entire thing via YouTube, as well.

Samsung has made the event one week after Apple's annual WWDC and a week before Microsoft's annual BUILD. The month should be a busy time for tech titans.
Tweet
Tags: Samsung Android Ativ
<Yahoo to bid between $600 and $800 million for Hulu >Sony bribes Minecraft creator with golden PSone
Previous Next
Comments have been disabled for this article.