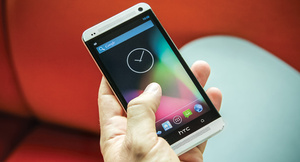 Although they previously denied the rumor, HTC has unveiled the Nexus model of their popular HTC One smartphone.
The move comes less than a month after Samsung and Google made a similar announcement for the Galaxy S4.

Unlike the version that uses HTC's own Sense overlay, the new Nexus model will start with stock Android 4.2.2 and receive updates directly from Google first, just like other Nexus phones and tablets.

Under the hood, the device is exactly the same, running on a powerful quad-core Snapdragon S600, 2GB RAM, 32GB internal storage, a 4MP UltraPixel camera and front-facing speakers.

For the time being, the device will be U.S-only, just like the Galaxy S4, and will work on GSM networks. The SIM is unlocked and the bootloader is unlockable.

Google will make the phone available in the Play Store on June 26th for $599.
Tweet
Tags: Google htc one Nexus Experience
<Alpha House, Betas and three children's shows will be first Amazon original series >Windows 8.1 is here, and the Start button is back among many other improvements
Previous Next Write a comment
Comments have been disabled for this article.