Unlocked BlackBerry 10 devices now being sold directly from the company 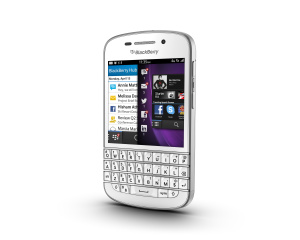 Following announcements from Sprint and T-Mobile that the carriers will no longer be offering BlackBerry 10 devices in store, BlackBerry has begun selling unlocked Q10 and Z10 smartphones directly through their own site.
The move also follows a recent earnings report in which the company saw revenue fall 50 percent year-over-year and the company took a massive $1 billion writedown due to excess Z10 inventory.

Somewhat surprisingly given their precarious situation in the market, the devices are still highly priced. The Z10, available in white and black, will sell for $449 and will work with any GSM carrier.

The Q10, with its full keyboard that is still popular with enterprises, will sell for $550. The Q10 has a 3.1-inch Super AMOLED display, 1.5GHz dual-core Snapdragon S4 Plus processor, 2GB RAM, 16GB internal storage, LTE connectivity, NFC, a microSD slot and a 2100 mAh battery.

For the time being the devices are only being sold in Canada and the U.S. Check the store here.
Tweet
Tags: Unlocked BlackBerry 10 BlackBerry Z10
<Sony unveils two new 24-bit/196 KHz audio capable Walkman portable media players running on Android >Here is the champagne iPad Mini 2 with Touch ID sensor
Previous Next

Perhaps buying one of these when the prices come down would be a great idea to use as parts for a transistor radio........