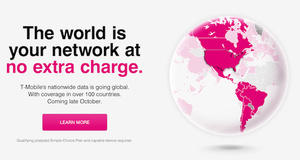 T-Mobile, which continues to be far-and-away the most consumer-friendly wireless carrier in the U.S., has unveiled its latest service, free unlimited international data and text services starting at the end of this month.
For customers with the new T-Mobile Simple Choice plans, the international roaming is free in over 100 countries, including countries that cover "pretty much everywhere people travel, about 95 percent of where people go."

Besides free data and texting, you can also make voice calls at 20 cents per minute. International roaming has historically been one of the bigger scams in the wireless industry with other carriers charging up to $18.99 per megabyte, and 15 cents per text sent or received.

T-Mobile does admit that the data will be very slow 2G speeds, just 128KB/s on average, good enough for emails, quick social networking, GPS mapping and basic music streaming but not too much else. You can upgrade to 3G roaming for a price, with daily, weekly, and two-week packages available.
Tweet
Tags: T-Mobile USA International Roaming
<'Watch Dogs' on PC will require 64-bit OS >PayPal intros payment by QR code
Previous Next

OK, here's how I translate this, Hey have some free crappy 2G speed roaming but if you want what this advertisement suggests you going to have to pay for it.

Not perfect, yet a huge step forward.
"You know, it seems that quotes on the internet are becoming less and less reliable." -Abraham Lincoln.
310.10.2013 11:58
hearme0
Send private message to this user
Senior Member

OK, here's how I translate this, Hey have some free crappy 2G speed roaming but if you want what this advertisement suggests you going to have to pay for it.

Hope you're not bitching cause this is better than Verizon's translation of "here, have a crappy WORLD phone and you're gonna pay an arm and a leg to use it in ANY WAY in any country besides the U.S.A."
411.10.2013 11:08
kfir1
Send private message to this user
Member

If you get a SIGNAL. tmo is a crappy carrier here in US and worse overseas.

If you are going overseas I suggest get an unlock smartphone and buy the sim and data service with it for a month. I was in Asia 6 months ago and it was cheaper just to buy the data service. Cost me only $30.00.

Sometimes i think people talk through their a****les. What volume of data transfers does a person - international traveler at that - need on his / her mobile phone that 2g - 3g is going to make a real difference. When it comes to texting it hardly matters. If one needs huge amount of data transfers to the phone that really needs 3g speed he/she is definitely using a wrong device.

Mind you they are talking about "International" where otherwise you either have no data cconnection or a phenominally expensive one.

My daughter brought her iPhone with Verizon global roaming which simply would not work. Indian sim would not work in her phone nor would her sim work on my BB.

Finally I simply managed to transfer her contacts to my BB with an Indian sim card and she was all set.