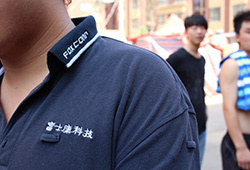 According to an in-depth report by Quartz, Foxconn forced almost 1000 engineering students to accept internship positions to build the upcoming Sony PlayStation 4.
The students, from the Xi'an Institute of Technology, were allegedly told that they would not graduate if they did not participate in the internship. The students were then forced to work night shifts and overtime in violation of company practices.

"Immediate actions have been taken to bring that campus into full compliance with our code and policies," Foxconn responded after an internal investigation. The company is also "reinforcing the policies of no overtime and no night shifts for student interns, even though such work is voluntary, and reminding all interns of their rights to terminate their participation in the program at any time."

This is not the first time Foxconn has been accused of forcing students to work under the threat of not graduating.
Tweet
Tags: Foxconn Students Sony PlayStation 4
<Google TV to be replaced by 'Android TV'? >Best Buy offers $200-$350 for Surface tablets
Previous Next

I'd like to work for Foxconn they seem like a great company! High suicide rates for their workers and forced labor of students, fantastic company!!

how about next time ya bring a hidden camera or microphone with ya.

just look at your boss.. tell him to go fuck himself.
who really cares.. you dont need a degree its over rated!!
hey, if sony fires ya, ya wont have a hard time working for microsoft :D

Why is this a big deal now. Apple used this same company and the cows still bought their products.