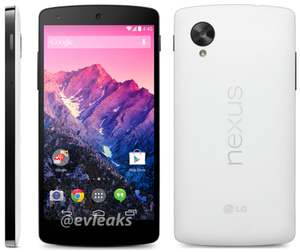 All-star leaker @evleaks has shown off the upcoming Nexus 5 in a new colorway, white (with black trim), and a release date.
The two-tone device has a black front, white back plate, and black accents including the camera and volume rocker/power button.

Additionally, the post says the device is "coming on 11/1" although it is unclear if it will be available on that day or just announced by Google.