Google officially announced the Nexus 5 earlier today, following months of leaks that revealed the hardware, its specs and its price.
The flagship has a Full HD IPS 4.95" 1920x1080 display (445 ppi) protected by Gorilla Glass 3, runs on the brand new Android 4.4 KitKat and is powered by a Qualcomm Snapdragon 800 at 2.3GHz, 2GB RAM, and an Adreno 330 GPU.

Google has priced the device a bit above its predecessor, the Nexus 4, (understandably given the specs), and the 16GB model costs $349 while the 32GB costs $399. The device is available in black and white/black.

Last year's Nexus 4 launch proved to be a disaster, decimating Google's servers and making orders almost impossible for days. By the time you could place an order, the shipping time was almost two months away, unless you were lucky. Today's launch was much better, but it doesn't appear Google had too much in stock, or demand really was as high as it appears. Shipping times are now showing as "leaving the warehouse in 2-3 weeks" for 32GB models and "3-4 weeks" for 16GB models.

Get your orders in here: Google Nexus 5 at Google Play 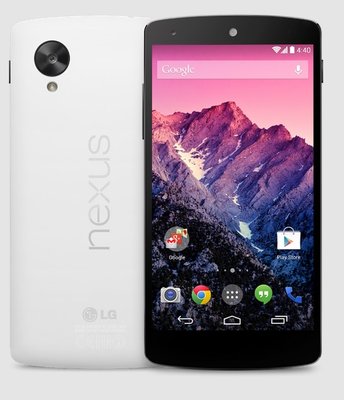 Did you buy one Andre?

Originally posted by Ripper: Did you buy one Andre?

Of course. Will have a review up this weekend to give it a couple of days of action.
AfterDawn News
AfterDawn Guides
One of the largest collections of software on the Web: AfterDawn Software Section
35.11.2013 12:12
Ripper
Send private message to this user
AfterDawn Addict

Originally posted by Ripper: Did you buy one Andre?

Of course. Will have a review up this weekend to give it a couple of days of action.

Nice. Got mine on Monday and pleased so far.

I was pleasantly surprised by how solid it feels in your hand relative to how light it is; there's no give anywhere, save for a bit of wobble in the power button. I picked up a black one and I like the "silky" back. Screen is really nice IMO and I haven't taken the plastic off yet til a screen protector arrives (speaking of which, WHY did they plaster a logo in the middle of the plastic knowing full well this is what loads of people do?!?).

My main and only real gripe is a popular one, I think - speaker quality could be better. Camera is acceptable.

Did you splash on any overpriced accessories? I'm hoping this soon-to-be announced new QI charger is priced appropriately as I'm looking to pick one up in general pretty soon.

This is interesting RE camera vs iPhone 5S:
http://www.youtube.com/watch?v=Qp6clWG-b5c