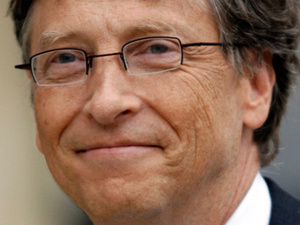 In an interview with the Financial Times, Bill Gates branded prioritizing Internet access in poor countries ahead of malaria research a 'joke'.
Known worldwide as the co-founder of Microsoft, its former chief executive and being unbelievably rich, Bill Gates spends most of his work time now on the Bill & Melinda Gates Foundation. The goals of the Gates foundation are to fight poverty and disease in the developing regions of the world, and to advance education in the United States.

Warren Buffet is one of three trusties that control the foundation, along with Bill and Melinda Gates. The three were recognised in 2007 as the most generous philanthropists in America. Bill Gates has donated $28 billion to the foundation thus far.

Malaria is an obvious target for the Gates Foundation. in 2010, there were an estimated 219 million cases of Malaria with an estimated 660,000 deaths. It is one of the diseases that disproportionately affects poor countries not just in rates of infection, but the impact it has on resources. A malaria vaccine has been a holy grail for researchers - including the U.S. military - for decades but thus far efforts haven't produced the revolutionary weapon against the disease that it coveted.

Nevertheless, the Gates Foundation has contributed over $1.3 billion as of 2012 to the Global Fund to Fight AIDS, Tuberculosis and Malaria.

Asked by the Financial Times about efforts being undertaken to bring Internet access to the two thirds of the world's population that does not have it, Gates frankly feels that priorities are out of order.

He also commented on Google's Project Loon, which is a project to deliver Internet access from balloons high up in the atmosphere to areas where it may be impossible to do so otherwise.

"When you're dying of malaria, I suppose you'll look up and see that balloon, and I'm not sure how it'll help you. When a kid gets diarrhea, no, there's no website that relieves that. Certainly I'm a huge believer in the digital revolution. And connecting up primary-health-care centers, connecting up schools, those are good things. But no, those are not, for the really low-income countries, unless you directly say we're going to do something about malaria."
Tweet
Tags: Bill Gates
<Viacom v. YouTube lawsuit in appeals court, Viacom claims YouTube 'induced' copyright infringement >Girls want iPhones, Boys want PS4 this holiday
Previous Next

this man is simply awesome! Wish he was CEO again!

It appears that governments in poor countries dont actually care about the health of its citizens,they just want to look impressive to the rest of the world and make money.

Bill gates didnt become the worlds richest man by being stupid or foolish, they should listen to him.

it was because of the wife of the owner of digital research that made bill rich.