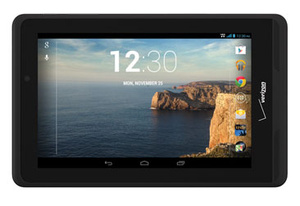 Verizon has launched its own branded tablet, following a few weeks of leaks and speculation.
The Ellipsis 7 is based on Android and has low-end specs compared to newer devices.

Ellipsis 7 tablets have a 1280 x 800, 7-inch IPS display, 8GB of storage, 1GB of RAM, and a 1.2GHz quad-core processor. Additionally, the device has LTE connectivity and a front-side camera and runs on a near-stock Android 4.2.

The device goes on sale tomorrow, November 7th for $249.99 off-contract, which is pricier than the Nexus 7, which boasts much nicer specs.

One notable feature, is the addition of Verizon Messages. The carrier says the service allows "users to send and receive text messages from their tablet. And with the most recent app update, users can send customized photos with collages for a more personal messaging experience."
Tweet
Tags: Verizon 7 inch tablet Ellipsis
<PS4 launch to stream live next Thursday night, November 14 >"How much money can you make with Spotify?" - Finnish artist answers, with exact monthly details
Previous Next

Quote:One notable feature, is the addition of Verizon Messages.

Not notable. Verizon Messages is available on Google Play (for Android) and the iTunes Store (for iOS).
27.11.2013 16:02
Bozobub
Send private message to this user
Senior Member

Yet another corporation utterly fails at pricing their product, with only greed to blame. Do they honestly believe no one does any research before buying stuff? Or that the Verizon name is particularly loved by consumers?