Recent headlines | SpaceX is ready to launch manned flight to space, first one in few months
AfterDawn > News > Low-cost but powerful Moto G reaches the U.S. much earlier than expected

Low-cost but powerful Moto G reaches the U.S. much earlier than expected 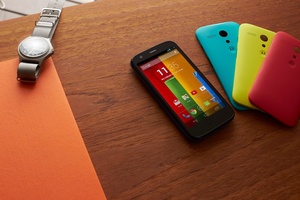 Motorola Mobility has made the new Moto G available in the U.S. a lot earlier than expected, with pre-orders now being taken directly at Motorola.com.
The unlocked global GSM-based phone sells for just $179 without contract but still packs a punch, especially at that price. The change in plans is significant as CEO Dennis Woodside had originally planned a January launch for the device.

For your money, you get a 4.5-inch 720p LCD TFT display, a quad-core Snapdragon 400 processor, 1GB RAM, 8GB internal storage and dual cameras, 1.3MP/5MP. On the design side, the Moto G looks just like its more powerful and expensive brother, the Moto X with some minor cosmetic differences.

You cannot use the Moto Maker customization site for the Moto G, but the backplate is removable and blue, teal, red, yellow, purple, white, and black covers are available at launch. Additionally, there are rugged versions and flip-style portfolio covers. Although you can take off the cover, the battery is non-removable.

The Moto G will start with Android 4.3, but KitKat will be rolled out by December. The Moto G was not given access to Moto X's software gestures, like Active Notifications, Quick Capture, and Touchless Control, due to its lack of the Moto X's specialized CPU/GPU.