IIPA: Canada continues to be a hotspot for piracy, remains on watch list 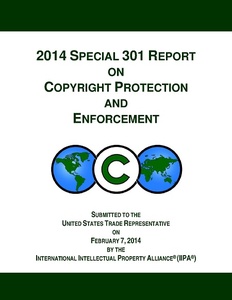 The International Intellectual Property Alliance (IIPA) has once again called out Canada for being a magnet for piracy, where piracy sites are free to operate and downloaders are free to download unauthorized content without fear of retribution.
IIPA members include the MPAA, RIAA, BSA and ESA among others, and the group last month released their latest report to the U.S. government in which countries are not doing enough to combat piracy. Just like in years past, Canada was placed in the 2014 Special 301 "watch list" for countries on the naughty list (via TorrentFreak).

In their complaints, one of the largest criticisms was that Canada remained a popular home to many "rogue" businesses including torrent sites like torrentz.eu and kickass.to as well as the recently shut down giant isoHunt. "Even after the shuttering of Isohunt, Canada is still the home to some of the world's most popular Internet sites dedicated to piracy, including torrentz.eu and kickass.to, which garnered rankings of third and second place, respectively, on one of the most widely accessed listings of the world's most popular illicit BitTorrent sites," the IIPA writes. The Pirate Bay of course remained in the top spot.

In addition, there were other warez sites, including cuevana.tv, free-tv-video-online.me, solarmovie.so, fenopy.se and monova.org named in the report. Canada will keep attracting these sites because there has yet to be any real enforcement action against them by authorities. "It is hard to avoid the conclusion that Canada remains a magnet for sites whose well-understood raison d'être is to facilitate and enable massive unauthorized downloading of pirated versions of feature films, TV shows, recorded music, entertainment software, and other copyright materials," the IIPA writes. "The largest of these Canadian-hosted sites attract scores of millions of unique visitors every month, and their corrosive effects on legitimate markets are felt worldwide."

Furthermore, because of a lack of enforcement against sites, and downloaders/uploaders, piracy is twice as frequent in Canada as it is in the U.S., says the report.

While our friend and neighbor Canada only made the watch list, a few foreign nations made the "priority watch list" in which the grievances are even more plenty. The nations include Argentina, Chile, China, Costa Rica, India, Indonesia, the Russian Federation, Thailand and Vietnam.

You can download and read the interesting (if not slanted) International 301 report here, including all the other nations that made the naughty list: IIPA Special 301
Tweet
Tags: piracy Canada IIPA Special 301
<Alleged UK 'cam' pirate has property returned, criminal charges dropped >Samsung shows off new powerful ARM-based Chromebooks with textured, stitched design
Previous Next

Proud to be Canadian.

Ooooooooh. We're on the "watch list". What's next, the IIPA will send us a firmly worded letter telling us that we're bad?

Originally posted by Morreale: Proud to be Canadian.

Right there with ya dude!!

The best damn country in the World, and right now the frikkin COLDEST too!! Only -56C yesterday, with wind chill, downright tropical in comparison today " -26...guess I better d`load a movie for tonight since I`m sure as hell not going anywhere.

As a Canadian I feel it's within my duty and right to say, "Deal with it,". If you actually made all programming easily available and affordable to our country as you do your own citizens then Canadian's likely to pirate would likely be cut in half. The same issue Japan had with it's manga and animation, as corporations over there realized: holy farking crap there's a market in the west for that!?

You want someone to blame look in the mirror for your constant theft of your own artists to appease a bunch of men in suits that do nothing but play blame game and come up with nothing feasible to help make content readily available via multiple sources to limit need of piracy. You sirs are the thieves and will always be until the US decides they had enough of your bs and disband what useless groups you are.

Originally posted by Mysttic: You sirs are the thieves and will always be until the U.S. Citizens decides they had enough of your bs and disband what useless groups you are.

Live Free or Die.
The rule above all the rules is: Survive !
Capitalism: Funnel most of the $$$ to the already rich.
63.3.2014 13:17
GernBlan
Send private message to this user
Junior Member

Showing my age a bit but how does the song go? "Blame Canada...!"

Those stupid Canadians and there rights not to be sued for stupid amounts of cash from mostly U.S. companies. I am proud to be Canadian. Just them saying piracy is twice as much, how so? The U.S. has more people living there a total of 4.44% of the world lives there. For Canada 0.49% yeah that's it. https://en.wikipedia.org/wiki/List_of_countries_by_population

Not Canadian but props to Canada! These people have got to get over it and move on. The days of their having a death grip on distribution are GONE. If they can't find new ways to earn (other than suing regular folks for millions they don't have)they need to go away. This is natural selection at work right before our eyes!

5 years ago when I was visiting some relatives in Toronto I was taken to a flea market. They even recharge your prepaid set top boxes at a fraction of the what it would cost otherwise.