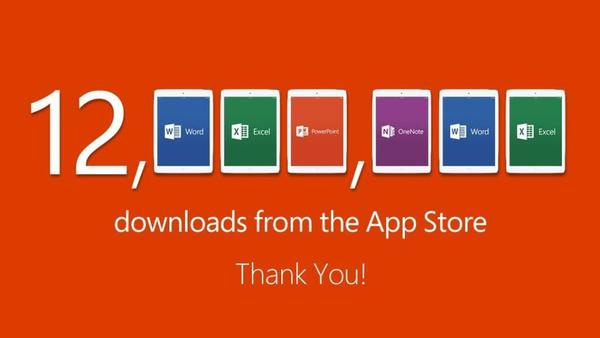 Microsoft has revealed that Office for iPad apps have been downloaded over 12 million times in just a week.
The Redmond-giant made its Office for iPad suite of applications available for Apple's flagship tablet last week, giving iPad users the ability to view Word, Excel, PowerPoint, and OneNote material. In order to create and edited documents, users need to pay a monthly subscription fee.

More than 12 million downloads of Word, Excel, PPT & OneNote for #iPad from the @AppStore <3 #OfficeforiPad pic.twitter.com/iT2egNPDkj

What Microsoft did not divulge however is how many new Office 365 subscriptions that the 12 million downloads translated to. The company is making a bet that users of its previous Office applications for Windows will choose to continue with its Office products on Apple's platform, rather than take advantage of free office apps already available.
Tweet
Tags: Microsoft Microsoft Office for iPad
<Nest halts smoke alarm sales, cites safety concerns >Five year old hacks Xbox One account, gets reward from Microsoft
Previous Next
Comments have been disabled for this article.