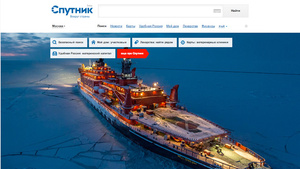 The Russian government-backed national telecom Rostelecom has debuted its new search engine, Sputnik.ru, in efforts to rival Google and other major players in the industry including Russia's own Yandex.
Launched in beta, the search engine will have its hands full against Yandex, which has 62 percent share in the nation. Google Russia has 27.6 percent.

Russia's Sputnik 1 satellite was launched into low Earth orbit in the late 1950s, and set off the "space race" between the U.S. and Russia. The name chosen for the search engine will undoubtedly bring back some memories.

The new Sputnik project was run by Alexey Basov, a Rostelekom VP with years of experience at sites and services like Mail.Ru, Begun and SpyLOG. Basov says the engine will have a competitive edge over rivals because it will give access to "everyday necessities." For example, its algorithms will help Russians with "social services" like "finding specific drugs in nearby pharmacies or gasoline prices at specific gas stations."

"We are attempting to make Sputnik a niche search engine, and believe that users ... can work with several search engines to solve various problems," added the executive. "Sputnik is oriented toward providing users with social rather than commercial services."

Sputnik will be able to carve out some immediate market share as it becomes the default search engine at state and government agencies. Basov says while it is the default, employees can use whatever search engine they like.