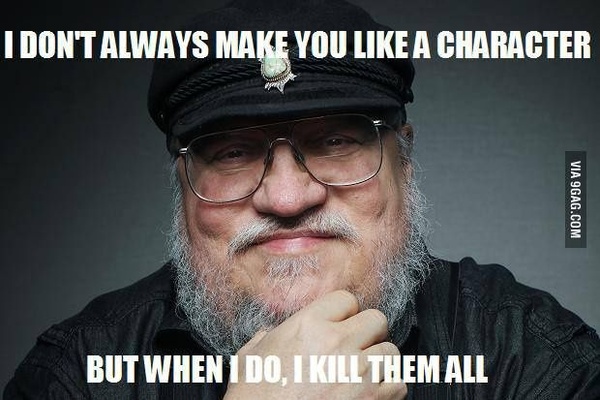 'A Song of Ice and Fire,' the book series better known now as Game of Thrones due to its popularity on HBO, will have two new characters killed in a "grisly" manner after the fans paid $20,000 each (to be distributed to charity) to have author George RR Martin create characters for them and then kill them off in the upcoming book.
David Goldblatt, a Facebook employee, was one of the two fans to win the auction. "I'm fortunate enough to be in a position to do this cool thing, and it's going toward a good cause – I don't think I'm doing anything extraordinary." Goldblatt says he would like "to be a Valyrian if at all possible, but he figures it out himself. I wouldn't want to impinge upon his creative process." As part of the prize, the winners will get to choose their "character's station in the world (lording, knight, peasant, whore, lady, maester, septon, anything)."

While hundreds of characters including some very notable ones have been killed off in the series, Martin says he does feel sad when they die. He will not have the same regret for the new characters, however. "Despite my sinister repute, I actually find it hard to kill off characters that I've been writing about for some time. Good guys or bad guys, they're all my children. But this time the slaughter should be easy, since the victims will be laying down their lives in a good cause. I will do my best to make their ends memorable."

The charities are a wolf sanctuary and a food bank in Santa Fe, New Mexico and anyone who entered to win could win a prize of taking a helicopter ride to the sanctuary with Martin himself.

Source:
Guardian
Tweet
Tags: game of thrones charity George RR Martin
<Samsung is building a Smart Bike >Tesla opens up all its patents for fair use to help electric car infrastructure
Previous Next