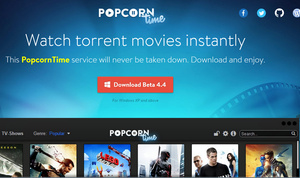 Popcorn Time has proudly announced the launch of beta 4.4 for Windows and Mac users, including much better VPN, Chromecast, Airplay and codec support.
The release is the first cross platform desktop version from the team, and it has all been built in C++ for Mac, Windows and Linux. The Linux beta will be available in a few days, but the major OS versions are available now.

Macs, for the first time you're also getting FREE BUILT IN VPN!!! Yes. Now you can also be anonymous!! (powered by Kebrum)

And, and we believe that you've been waiting anxiously to read these words coming from our mouths....

SUBTITLES support FOR CHROMECAST!!!
Yes, this one was a tough cookie, but we ate it and now you can cast all your favorite movies with their subtitles using Chromecast! ;-) Apple TV, you're next to get subtitles, don't worry.

Better cpu usage!
Free built in VPN
Improved Chromecast support
Chromecast subtitles !!!! (don't tell the Android users, they're also waiting for this... and they'll have it soon!!)
Improved airplay support
Smoother and improved video player.
It's now supporting more video codecs.
Subtitles size control
The option to help the community and flag bad torrents... Cause no one like'em shitty torrents!!! :-)
Major bug fixes
Lot's of love hard work and sweat from your devoted PT team.
So enjoy, and if anything doesn't work for you, please fight the urge to report it here, but just click this link here and post it there.

Check it out here.
Tweet
Tags: Popcorn Time
<Someone is trying to trademark Popcorn Time, and it isn't the Popcorn Time team >Good deal alert: Unlocked international LG G3 for $480
Previous Next

I feel the need to point out that this is the 'closed-source' variant Time4Popcorn, and not the 'open-source' offering of PopcornTime at popcorntime.io. Closed being that although the source is available to download, global contribution and ability to share changes through commits, etc aren't possible.

Admittedly, the 'open-source' version is lagging (only slightly) behind this in development but with the exception of an Android app, they appear to have caught up.

Edit2: It's also worth noting that the two developments are taking different directions with regard to language used and implementation.

I would also suggest people be careful using a VPN service they know little about just because there is a box available to tick.

(I'm not affiliated with either obviously, just a PSA)