Recent headlines | Google, Spotify and many other major websites are all down across the globe 3
AfterDawn > News > Apple to get a cut off all Apple Pay transactions

Apple to get a cut off all Apple Pay transactions 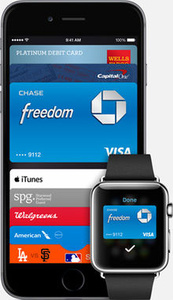 According to new reports, Apple will take a cut of all Apple Pay transactions, a market moving event, if accurate.
Sources say banks and payment networks will pay 0.15 percent of each purchase to Apple. With tens of millions of transactions expected to be done daily in the future with the NFC-based service, Apple will effectively have added another huge revenue stream.

Banks remain at the center of the service, so supposedly Apple Pay was not seen as a threat, and the service will also save the banks and processors millions of dollars per year with less debit/credit cards to replace and less fraudulent transactions to investigate.

Speaking of the security of the service, MasterCard executive Jorn Lambert, explained that Apple Pay uses a token system that encrypts every single step of the payment process. Each credit/debit card is assigned its own Dynamic Account Number token. Every token is then stored securely within the iPhone and each transaction gets its own unique cryptogram. By making a purchase using the Touch ID fingerprint reader, the Touch ID authenticates the security, and then sends the cryptogram along with the token to the merchant. If the network decrypts and authenticates the crypto, it is then passed to the bank who decrypts the token. Your actual card numbers are never shared nor stored anywhere.

Apple Pay is set to launch next month with iOS 8, and will work with over 200,000 U.S. retailers. Notably, Best Buy and Walmart have "opted out" of the service. Within the next year, all POS machines should be upgraded to have support for NFC and chip cards, which are much more secure.

How is this even news? WorldPay, Paypal and all Major Credit Cards charge either the retailer or the bank. In the UK some retailers pass this fee onto the consumer.

Corporate Greed is the name of the game now on days.

All the Corporations are on line the keep F**king the ppl.
Boycott them and see if they can get a Quarter from us. Live Free or Die.
The rule above all the rules is: Survive !
Capitalism: Funnel most of the $$$ to the already rich.
317.9.2014 17:38
bobiroc
Send private message to this user
Senior Member

Well Apple wouldn't do something just to make things more secure now would they.. Everything is about the money..

This is a service I will not be using or any pay service tied to my cellphone... encrypted or not..