One last setting you'll have to be ready to set on your MPEG encoder is DCT precision. This is approximately equivalent to the level of detail encoded in the file. In reality it's the accuracy of a particular calculation used to reconstruct each frame. The higher this value is the better, and the valid range for DVD is between 8 and 10. These are also the values CCE makes available so we don't have to worry about setting it out of range. Generic MPEG-2 encoding allows values up to 11.

If you're starting with an MPEG-2 file, there's no point in encoding with a higher DCT precision than the source. If your MPEG files are from a known source you can assume that source's precision. For example, my old capture card had a DCT precision of 8, so I used 8 when re-encoding as we're doing here. Since we don't know the source of these files we'll need to find a way to determine that value.

Bitrate Viewer can give you some basic information about an MPEG file, including the DCT precision. We'll open each MPEG and record the value for use in our MPEG encoder. Once you run the installer and start the program you can load your first MPEG-2 file. On the right side of the window is a button with ... on it. Use that button to load an MPEG-2 file. Once your file is loaded you can either wait for Bitrate Viewer to read through the file or simply use the scrollbar on the bottom at the right to find the DCT precision. Repeat for each MPEG-2 source. 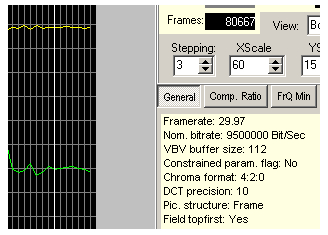