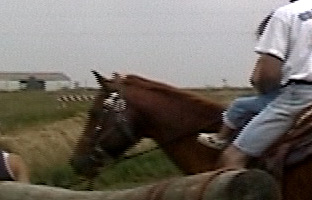 There are two basic formats for video, progressive and interlaced. Film is a progressive source because each picture fills the entire frame. That means the framerate is the number of individual pictures. Analog video, on the other hand, uses interlaced, or field based, video. Interlacing uses two different pictures to fill an entire frame. One field (picture) is drawn using every other line on a television screen, followed by a second field that's drawn on the lines skipped by the first. The fields are said to be interleaved together or interlaced. Like with film, each picture is from a different moment in time. Unlike film, the rate of individual pictures is twice the framerate.

While film only has progressive frames, and analog video only interlaced fields, digital video may have either or both. In the digital domain displaying progressively is a property separate from the contents of the frame. Although it's possible to encode and store interlaced video as a stream of fields, in reality this is rarely done. Most interlaced video is encoded in pairs in the form of frames. Although this is less efficient than true field based encoding, it's also simpler to design hardware for, making it a useful standard. As a rule, frame based interlaced encoding is less efficient than progressive encoding. This means that files with comparable bitrates will have lower quality if they contain interlaced video.

When referring to interlaced fields there are different names given to each field in a pair. It's not important which convention you use, but it's a good idea to be consistent to avoid confusion. Sometimes the fields are referred to as even (lines 0,2,4,6,etc,...) and odd (1,3,5,7,etc,...), top (includes top line) and bottom, upper and lower, or even a (top) and b (bottom). I prefer even and odd personally because it conveys the interlaced nature of the fields better, but the most common convention is probably top and bottom.

The pictures that make up interlaced fields have a correct order relative to each other. In fact there is both a spatial order, meaning which should be the top or bottom field, as well as a temporal order, or which one represents an earlier moment in time. If either one or both of these is incorrect it can cause playback problems from jerky motion to blurred edges.

Either the top or bottom field of an interlaced frame will be displayed before the other. The field played first is considered the dominant field. This can be abbreviated to indicate which field (top or bottom) is first temporally. If the top field plays first the video is Top Field First, or TFF. This is also known as field order. Video with a dominant bottom field is considered Bottom Field First or BFF. Since field dominance is normally set by a flag of some kind for every video stream, it can generally be changed with no loss of quality to the video because no re-encoding is required.

The fields that make up a single interlaced frame also have a spatial relationship to each other. The position of details in one frame is slightly different, either higher or lower, than the details in the other. This position is referred to as polarity, either top or bottom. This is important because in some cases fields can get reversed so that the top field is encoded as the lower field in a frame and the bottom field at the top. In such cases field dominance may or may not also be incorrect. The image on the left shows a portion of a frame with correct parity (ie fields in the correct spatial positions). Notice how much more detail you can make out in the man's face compared to the image on the right with reversed polarity.

If you have a video file with incorrect field dominance or reversed fields there are sometimes fixes available that won't result in any quality loss. But in some cases there's no way to get around re-encoding. In many cases field order problems are created during analog video capture. As long as you have access to some tool capable of changing video header information for the format you're capturing in you can generally change field order without altering the contents of the fields. For reversing field position you'll need to re-encode the video to fix it.

Sometimes it's necessary to deinterlace video for a variety of reasons. In some cases you may be encoding with a codec that doesn't support interlaced video (like MPEG-1). In others you may have a progressive display (like 720p) that you're planning to display your video on. Your options vary, depending on the editing tool you use and what's supported by your destination fomat and display technology. One quality that makes 720p HDTV technology easily adaptable for displaying interlaced content is an available framerate of up to 60fps. Since 720p standards allow twice the framerate of standard interlaced video (29.97i NTSC or 25i PAL) you can use a deinterlacing method called bobbing to avoid any loss of temporal information. Bobbing creates a progressive stream made up of individual fields in display order. Vertical resolution is cut in half because of this, and because of spatial differences objects appear to bob up and down from one frame to the next. At this point, either half the bobbed frames must be shifted down one line and then resized back to full resolution, or the missing lines from opposite fields need to be interpolated. Very few programs are capable of high quality interpolation on this scale, so it's still an area that's improving.