What Will You Be Watching?

Manufacturers often make it seem like the solution to all video quality issues is simply a matter of viewing it on the biggest screen possible, at the highest available resolution, and of course using the latest, greatest, and most expensive technology. In reality there are many elements that go into the image quality on a HDTV, and it always starts with how your video is processed before even reaching the display.

Even though you may be buying a HDTV for watching HD broadcasts and playing movies in a hi-def format like HD DVD or Blu-ray, you'll probably be watching some standard definition video like what's found on DVDs. This means relying on scaler technology, which converts between SD and HD resolution. In general it's best to scale your video before it even gets to your HDTV because other devices (like upscaling DVD players and HTPCs) will almost always do a better job than any TV. In some cases, like watching video from the HDTV's built-in tuner, the TV's scaler will be have to be used. The more SD signals you plan to connect to your HDTV, the more attention you should pay to the quality of its scaler. 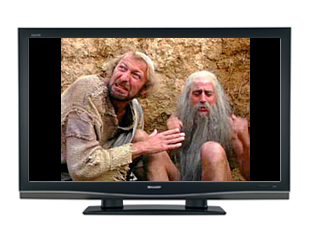 Since all HDTV is widescreen (16:9 Aspect Ratio), older video and some film is displayed with black borders on each side, also called pillarbox. If you want this 4:3 video to fill the entire screen you basically have two options. You can zoom in, which cuts off the top and bottom of the frame. Alternatively the image can be stretched, resulting in distortion but using the entire screen.

While there's a lot of interlaced video, both analog and digital, not all HDTVs are interlaced displays. As a matter of fact only all HDTVs except 1080i CRTs are actually progressive, even in they're made for 1080i. If you're buying a 720p HDTV you'll want to consider the quality of its deinterlacer. This is particularly important if you plan to watch either a lot of older (analog) TV shows, which were often recorded on interlaced video (480i or 576i). Making things even more complicated is the use of telecine to convert 24fps progressive film to 29.97fps interlaced video. The quality of deinterlacers can vary widely from one model to another, both in features supported and quality of implementation. Like scaling, this is best handled by external hardware or software, preferably before encoding the video.

The image on the right is part of an interlaced image that's being displayed on a progressive display with no deinterlacing. Click on it to see the entire frame.

There are a variety of different connections that can be used to deliver video and audio to a HDTV. Various models have different combinations of both analog and digital, not to mention SD and HD inputs. Although opinions vary as to what connections are best, one clear fact is that your HDTV's connections should match any receivers or players you intend to use. Generally most equipment can be connected with an analog component video (3 cable) connection. DVI (Digital Video Interface) and HDMI (High-Definition Multimedia Interface) may also be available. Audio can be delivered using an analog RCA cable connections or with the video signal using HDMI. 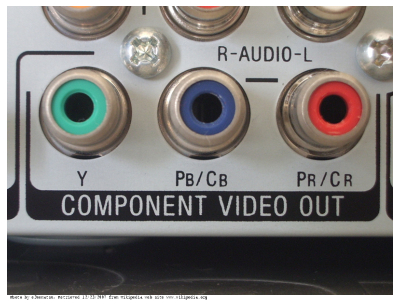 There are several revisions of the HDMI standard, each of which is capable of delivering any HD video you'll encounter. They primarily vary in support for various audio formats, which isn't generally an issue for the TV, but rather for connections to a home theater receiver. For detailed information on HDMI read our guide on the subject.

If you're connecting a standard definition video device like a normal DVD player or SD television (cable or satellite) receiver to your HDTV you'll need to use an appropriate connector, preferably S-Video. This will result in the scaling for SD video mentioned previously.