Recent headlines | PC sales is once again trending up, except for Apple
AfterDawn > Guides > Getting Started With HDTV

Resolution may be the single most over-hyped feature in a HDTV. Although it's a complex subject to truly understand, from a consumer's point of view there are really only a few things you need to know. Unfortunately even these simple things are often misrepresented, both by HDTV manufacturers and many reference sources.

There are two standard HDTV resolutions that all HD video is broadcast in. Additionally, HDTVs are commonly used to watch SDTV (Standard Definition TV), either digital or analog, and playback SD video such as DVD or even VHS. The graphic below shows the difference between the different HD and SD resolutions. Although it appears to show a difference in size, it's actually an indication of the number of pixels. It does, however, give you an idea of why larger screens benefit from 1080i or 1080p resolution vs. 720p. Although not obvious from the diagram, the difference between SD (480i/p and 576i/p) and the lowest HD resolution (720p) is much more dramatic than the jump to 1080i/p. Of course for larger screens 1920x1080 resolution can be remarkably good, particularly for HD DVD and Blu-ray content. 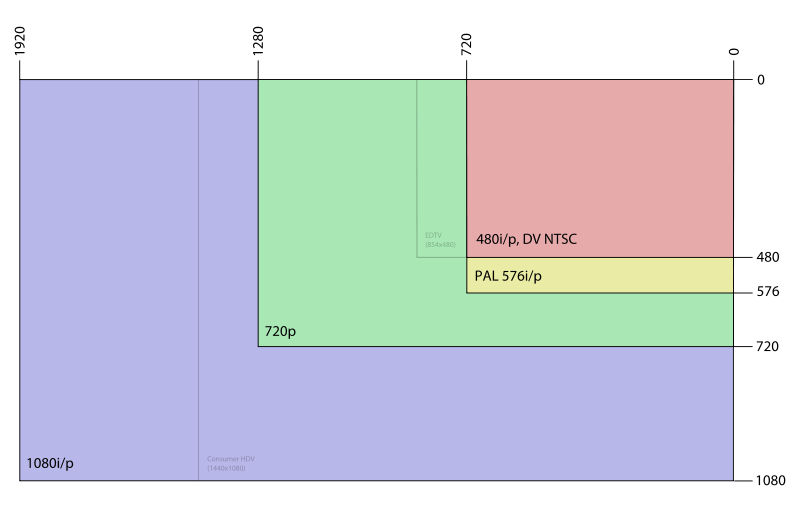 In reality there are two different types of resolution. The one you're probably familliar with is display resolution. This is the actual number of dots that make up a HDTV image. It's a completely objective number that can be measured and easily compared from one HDTV to another. Visual resolution, on the other hand, refers to the amount of detail your eye can perceive. This is completely subjective, and varies not only from person to person, but even based on the distance between the viewer and the screen. Obviously visual resolution (perception) is always limited to no more than display resolution (actual detail). That seems simple enough. If you have a 1920x1080 HDTV you can see detail equivalent to 2073600 pixels (dots).

In fact the amount of detail you can make out (visual resolution) is determined by not only your TV's display resolution, but also how far away you're watching from compared to the size of the screen. If you're close enough you should always be able to see the extra detail in a 1080i or 1080p picture vs. 720p. But as you get further away, particularly from a smaller screen, you might not be able to make out as much detail, and if you're far enough away you won't see any difference at all. For many rooms the amount of visual resolution for closer viewers may be more than it is for those further away. For larger screens this may not be an issue.

The key to understanding this one is the notation of Frames Per Second (fps) used for all formats, whether progressive or interlaced. A frame occupies the complete area of the screen, regardless of whether it's a single progressive picture frame or two interlaced fields stored as a single frame. In other words 1080i @ 30fps has the same number of lines as 1080p @ 30fps. They're just stored in twice as many pictures. In reality you might more accurately say that 1080i requires more bandwidth for the same quality as 1080p because interlaced encoding is less efficient, resulting in lower quality at the same bitrate. 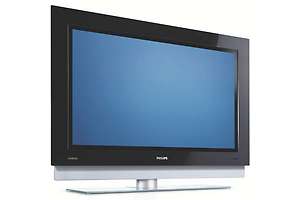 While There are only two standard resolutions for HDTV content, there are several native resolution's for the HDTVs themselves. Every DLP, LCD, and plasma TV has a native resolution. This represents the fixed resolution it supports. Any video not in that resolution must be scaled either up or down to be displayed. If you're looking at a flat panel TV (LCD or Plasma) it may not have either 1920x1080 or 1280x720 resolution. Resolutions of 1024x768 and 1366x768 can be found in these HDTVs, requiring every signal to be scaled as there isn't any content in either resolution. These TVs are still perfectly capable of decoding signals in the two standard resolutions.

Myth: All Digital TVs are HDTVs

Not all digital TVs are HDTVs, although other resolutions are becoming less and less common. Many early digital TVs were actually either SDTVs (with resolution equivalent to DVD's 720x480/576) or EDTVs (with resolution equivalent to anamorphic DVD's upsampled 853x480 / 1024x576). As long as the TV has a built in ATSC or DVB tuner it will still be able to receive and decode HDTV broadcasts, but they'll be scaled to the display's native (SD) resolution. If you're buying a TV specifically for watching DVDs or other SD content these are good choices, but they won't deliver high definition quality. a HDTV signal can contain as much as 5 times the number of pixels as an EDTV can display.

Although it's true that 1080i or 1080p video contains more spatial information, a lot of factors go into the final quality that reaches your HDTV. A large part of the decision on your HDTV's native resolution should be based on matching the resolution of the video you'll be watching. Between the time a broadcast originates until it gets to your TV there are a number of opportunities for processing, and even conversion into different resolutions. Video can never have any more detail than the lowest resolution it's converted to, even if it's scaled back to a higher resolution format. In other words a 1080p signal scaled to 720p has lost the extra details forever.

If your primary concern is the quality of HD DVD or Blu-ray video you'll definitely want to seriously consider 1080p or 1080i HDTVs to match the standard resolution for both HD video in both formats.

Complicating matters further for some is the potential to use either HD DVD or Blu-ray for everything from HD camcorders to HDTV captures. Until HD DVD and Blu-ray burning comes down significantly in price standard recordable DVDs (DVD-5 and DVD-9) will be the best option for most people. Whether it's to match the resolution of the original HDTV broadcast or to limit the bitrate to fit standard DVD media, 720p may be the standard for these types of discs for some time to come.

Although modern 1080i and 1080p HDTVs are all capable of delivering at least 60fps, video encoding technology used for consumer video, whether it's HDTV, digital camcorders, or HD DVD and Blu-ray, isn't capable of that yet. Since a 1280x720 HDTV has fewer than half the pixels of a 1920x1080 model, 720p signals can be encoded at up to 60fps, rather than the 30fps maximum imposed on 1080i and 1080p. This also translates into the game console world, which isn't restricted by video encoding but still adheres to broadcast standards which only allow 60fps for 720p signals.

previousWhat Do You Watch?  | nextLCD, Plasma, and DLP