Recent headlines | Guide: How to Kick Unwanted Guests from Your Netflix Account
AfterDawn > Guides > Encoding From DVD to AVC with AutoMKV


Traditionally, MPEG-4 encoding has meant using reduced resolutions. Things have come a long way from the days of 1 and 2 CD DivX and XviD encoding, and you may not want to resize at all. If your goal is maximum quality at a more reasonable size, rather than extreme compression or playback on a mobile media player of some kind, you may not want to leave the video as-is by selecting Original as the Width Resolution on the Basic Settings tab. When set to Automatic AutoMKV will determine the "best" resolution to use for you based on the output size (bitrate) you've selected. You can get more control of the process, either by tweaking the AutoResize feature or even entering your own crop and resize numbers.


Manual Crop and Resize disables AutoMKV's AutoResize feature, and simply assigns the values you enter here. Many people prefer to cropy the top and bottom borders from widescreen movies and encoding in the movie's actual aspect ratio, such as 1.85:1 or 2.35:1, rather than widescreen HDTV's 1:1.78. Since this means black borders will need to be added by your player software or hardware when sent to a standard HDTV you may want to experiment with removing and keeping the borders to see if its handled correctly.

Enter the number of pixels you wish to crop from the Top, Bottom, Left, and Right. If you specify a width and height they'll be used, along with your choice from the Resize Filters list on the Basic Settings tab, to resize the after cropping. 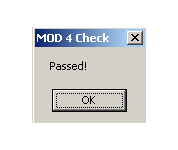 
Ideally your video will have a Mod16 height and width, meaning the vertical and horizontal resolution will both be evenly divisibly by 16, such as 640x272, but it's possible to go as low as Mod4 (evenly divisible by 4). Because AviSynth works in the original MPEG-2 color space it's also important to make the crop values divisible by 4 as well since that's the resolution of the chroma (color) components of the image. You can verify both the resolution and crop values themselves using the Check Values button. Each of the crop values will be checked to make sure they're Mod4. If not you'll get a warning. Then the final resolution will be checked, a dialog will appear if you have a Mod4 resolution.

Cropping in particular usually requires that you visually inspect the video. The Preview button will allow you to determine if there are black borders on the sides to crop, as well as a blue mask to represent the output of particular Crop values. 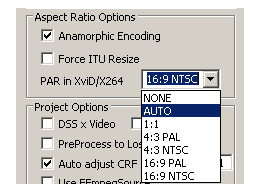 
Like the MPEG-2 video used for DVDs, AVC may be anamorphic, meaning it doesn't have to use a 1:1 (square) pixel shape. On a DVD 720 pixels can be displayed in different shapes (length to width ratios) depending on whether the image is widescreen (16:9 anamorphic) or fullscreen (4:3), as well as whether it's encoded for PAL or NTSC. The Anamorphic Encoding option sets the DAR (Display Aspect Resolution) to match your movie after encoding.4:3 PAL, 4:3 NTSC, 16:9 PAL, 16:9 NTSC should be used for PAR in XviD/x264 if you're not cropping or resizing from your DVD. If you're resizing to a "square pixel" resolution, such as 640x480 for fullscreen DVDs, you should use 1:1. If you're cropping borders to avoid wasting bits on them you may want to set the video stream PAR to NONE and set the AR in the container, as described on the next page. This allows you to set an aspect ratio like 1.85:1 or 2.35:1 which aren't generally used for applications like DVD or Blu-ray, but are common for theatrical movies.