Hulu, the online video service started last year by NBC Universal and News Corp. (owners of the various Fox brands), has now gone public after four months of private beta testing. I received my invitation to the beta early on and despite (or maybe because of) my skepticism about these companies' grasp of the web audience I immediately logged in to see what the latest train wreck out of Hollywood looked like. Imagine my surprise when I logged in to find a service I could see myself visiting regularly for my own personal use.


As the public launch has gotten steadily closer I've noticed a lot of misconceptions about what Hulu is supposed to be. The most common one seems to be that Hulu is just another corporate attempt to copy YouTube. Hulu is not a YouTube clone, nor was it ever intended to be. Some people seem to take this as a sign that it's doomed to failure. I take it as the first sign that it may actually have a future. YouTube is successful because they're better at being YouTube than anyone else, and if recent history has taught us anything it's that you can't compete with them on their own turf. Just as in any other venture, if you want to compete you must play to your own strengths. If Hulu is to succeed they will have to come up with something that makes them unique, rather than just another face in the crowd. 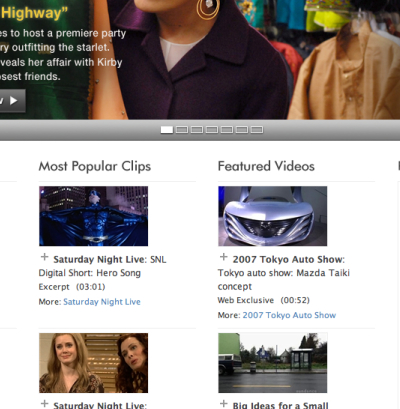 What Is It Then?

Admittedly, "not YouTube" covers a lot of ground, whereas Hulu has a fairly narrow focus. They offer an assortment of full episodes and short clips from both current and past TV shows, as well as "edited for TV" movies. While most of the older shows are from the 1980s and 1990s, like "Hill Street Blues" and "Miami Vice," there are a few exceptions like "Lost In Space" and "Dragnet." Shorter clips range from complete "Saturday Night Live" sketches to short clips from "The Simpsons" and "Family Guy." You can even cut your own clips from complete episodes and share them with your friends.


Given my frequent criticism of record labels for their unwillingness to risk their own money for developing a new business model, it's only fair to mention that this is exactly what NBC and News Corp. are doing with Hulu. Whether it succeeds or fails, they should be at least be given credit for the effort. And really they deserve more credit than that. 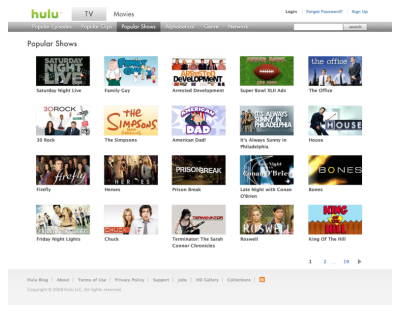 Hulu's selection of current TV shows is fairly broad. It includes shows from not only the Fox and NBC broadcast networks, but also a variety of cable channels owned by by NBCU and News Corp., including the SciFi and USA channels. The collection of older shows is somewhat eclectic, and ranges from some classics like "Kojak," "Alfred Hitchcock Presents," and "The Bob Newhart Show" to "Airwolf" and "Major Dad." There are options to show popular episodes or sort all of them alphabetically, by genre, or even by network. In addition to content from NBCU and News Corp, Hulu's includes video from MGM, Sony Pictures Television, and Warner Bros. Television Group.

The quality of Hulu's video streams is equivalent to what you'd get directly from a network website. While it's certainly inferior to commercial offerings from companies like Netflix, it's good enough to be enjoyable when viewed at a decent size on a computer monitor. 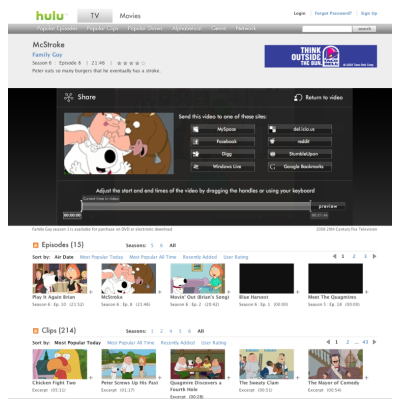 Promoting Hulu Video on Other Sites

Hulu allows you to add their video to your own web page. If there's one thing the entertainment industry has had a problem wrapping their collective heads around its the potential for free promotion by fans everywhere. The best way to fight illegal web video is to offer a legal alternative, and convincing viewers to add their legal video streams to personal pages is much more profitable than paying a lawyer to threaten them. There are also options to promote Hulu video via a number of popular sites from MySpace and Facebook to Digg. You can even email a link to any available clip.


Hulu is currently only available to U.S. residents. While Hulu plans to eventually offer their service worldwide, no timeline has been announced. The issue is reportedly one of licensing. No doubt part of the problem is timing. TV shows don't necessarily air simultaneously in different countries, and it seems unlikely that any studio wishes to see their shows devalued in foreign markets by offering them online months in advance. 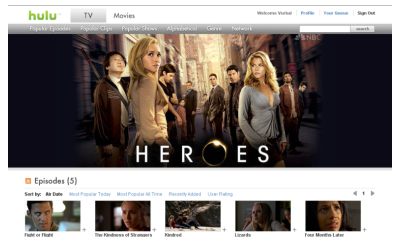 
Unfortunately you won't find even a full season of any current show on Hulu. Each show is limited to five episodes at a time, with new episodes replacing the older content for current series. Some older series include up to a full season. While its understandable that the networks don't want to cannibalize DVD sales with less profitable streaming alternatives, it seems unlikely that this would be a problem given the clear quality difference between the two.

If, like me, you've replaced your DVD player with a HTPC you've probably wondered when TV networks and similar online video providers will offer a product that's easily integrated into your media center software. Hulu is no exception. No one is going to confuse Hulu's video with a DVD, but it is good enough for me to justify watching on my TV rather than sitting at a computer. Sadly it still requires plugging in a mouse and using a web browser. While this may not be a fatal flaw, it seems like one of the few areas where Hulu would benefit from copying YouTube's approach by getting support on every device and platform imaginable.


As much as I like Hulu, I don't see it as a finished product. While the scope of available content may be ground breaking for television networks, ad-supported streaming isn't exactly revolutionary. It has the potential to be a sort of test lab for content owners to figure out new ways to deliver content online, but that still requires that they provide some innovation. The good news is that network executives like NBC's Jeff Zucker have clearly figured out it's better to develop a product that makes you a little money rather than letting your viewers come up with one that makes you nothing.