Use multiple Screens/Computers with Synergy

This guide shows how to use Synergy with two or more systems to emulate a dual-screen setup. Synergy allows you to use the same keyboard and mouse on two or more systems. Moving the mouse from one screen to another is as simple as moving the pointer off the side of the screen.

It also shares a clipboard among multiple systems, making it possible to copy and paste text between them. Synergy is technically multi-platform, though for now we are only including Windows operating systems in this article.


Synergy will require that all of the systems you are going to use it with be on the same network, whether it is wired or wireless, and should be able to easily communicate with each other (check firewall settings etc.). 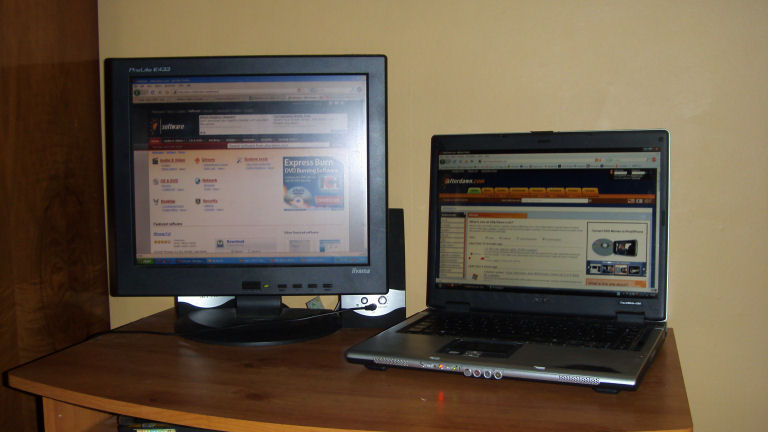 Synergy lets you easily share a single mouse and keyboard between multiple computers with different operating systems, each with its own display, without special hardware. It's intended for users with multiple computers on their desk since each system uses its own monitor(s).

Redirecting the mouse and keyboard is as simple as moving the mouse off the edge of your screen. Synergy also merges the clipboards of all the systems into one, allowing cut-and-paste between systems. Furthermore, it synchronizes screen savers so they all start and stop together and, if screen locking is enabled, only one screen requires a password to unlock them all.

In the example picture, the 17-inch LCD to the left is the monitor of the main computer. To the right of it is an old laptop. It has been setup with Synergy to use the same keyboard and mouse, to emulate a dual-screen setup when a second monitor and/or dual-monitor hardware is not available, or is otherwise impossible. Both are connected to the same wireless network. 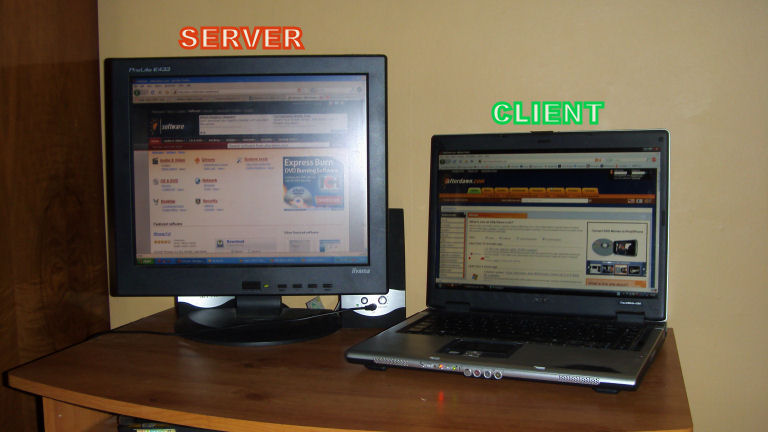 Whichever computer is hooked up to the keyboard and mouse that you will be using for all of your systems is your SERVER. Every other system is a CLIENT. In this guide, as an example, I will setup Synergy on the server and client shown and get it to run.

Install Synergy on All Computers

Download the Synergy installer for Windows onto both your systems (or all of them, if more than two). It is a simple installation that only takes a few steps. Once it has been installed on all systems, the first thing we will be doing is configuring the server. Since all other systems must communicate with the server on the network you will need to find the hostname of your server first.

In order to find your hostname easily in Windows, right click on My Computer on your Desktop (Computer in Vista) and click Properties. Click the "Computer Name" tab. Then look at the setting down for "Full computer name". In the example picture, my computer name is JAMIED. If My Computer (or Computer) is not on your Desktop, you can find the System settings in the Control Panel (under Classic View from left-panel).

When the command prompt loads, do what I did in the sample picture above. Type "Hostname" and hit the return key. The program will now print the Hostname of your computer on the next time. Again, mine is "JAMIED". Take note of your Hostname.

Run Synergy from the Desktop icon that will have been created during the installation. A window such as the one above will load. You may start receiving error messages about an incorrect hostname; don't worry about that yet. The server holds all of the information required on which screens are to be used, where they are, which screen to switch to when you move the pointer off of it on the left or right hand side etc. We need to input those details now.

Select the "Share this computer's keyboard and mouse (server)" option as shown in the screenshot above and then click the Configure button.

When the Screens & Links window should appear, the first thing we will have to do before we can make any links between the screens is to Add our Screens to it. Click the Add Screen button that has been marked out in the screenshot above.

The first screen we are going to add is the server screen. Again, the Server is the computer that has the keyboard and mouse you intend to use connected to it. The only thing you technically need to do here is name the screen and that's it. Now it is suggested that you name it the same as your computer Hostname, but you technically don't have to do this (we can fix this later). So Add it in as Screen1 or something similar to that.

Note that the other settings on the page are there in case you have problems with Caps Lock, Num Lock or similar. Only change these settings later on if you have particular problems with these keyboard functions while using multiple screens. When you have added the server screen, then move ahead and add the Client(s). Simply repeat the process and add a screen, we will call it Screen2 or something. 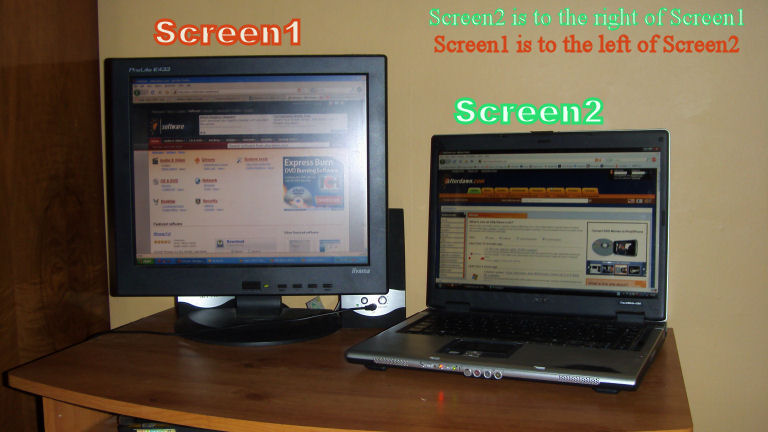 Look at the picture above. In this example, I need to tell the Synergy server that Screen2 (laptop) is to the right of Screen1. This will result in the mouse and keyboard switching from Screen1 (the computer) to Screen2 (the laptop) whenever I move the pointer off of the right side of the Screen1. However, if I leave it at that, I will not be able to move the pointer back to Screen1, which obviously is a problem.

The reason for this is that Synergy needs to know that Screen1 is to the left of Screen2, therefore when you move the pointer off of the left side of Screen2 (laptop) then the keyboard and mouse control goes back to the Screen1 (computer). Confused yet? It makes perfect sense, read it over a couple of times and example the picture, and it will come to you.

In order to make a link between Screens, start by clicking on the Server Screen (Screen1, the one you added first). When you have done that, select [New Link] as shown in the screenshot above and now in the highlighted settings boxes before (in red), you can make a link. Read the next part carefully.

With your screen selected, and with [New Link] highlighted, you can now make a link. If you have Screen1 selected (in my example) then you would enter the following settings..

What this basically says is that Screen2 is to the right of Screen1, and when you have moved the pointed all the way off of the screen on the "right" side of Screen1, then the mouse pointer will move to Screen2 (along with keyboard control, clipboard etc.) So that's one part of the journey done. It is IMPORTANT to remember that when you have setup a link, click the Add Link button as highlighted in the picture above, and it will then show up in the list of Links.

Now the next thing we need to do is Add a second link that will instruct Synergy that Screen1 is to the left of Screen2, or else you won't be able to get your keyboard and mouse control back from Screen2 once it is there. So firstly, select Screen2 in the list of Screens. Then select [New Link] under the Links list, and enter the following.

Once you have added the instruction, click the Add Link button. Make sure both links show up in the Links list.

Do this ONLY if your Screen names are NOT the same as your computer hostname. On your Server screen first, run Synergy and click Advanced. Now, set your Screen Name to Screen1 (or whatever you called your Server Screen) and click OK. On your client computer (second screen - laptop in my case), run Synergy, click Advanced and set the Screen Name on that too (in my case, the Client screen is Screen2). If you don't do this, Synergy will be unable to identify where the Screens you defined in your links are on the network.

On your Client computer (or computers), you now must inform Synergy where the Server is located on the network. Remember retrieving your Hostname earlier for the server computer? Mine was JAMIED. On the Client computer, in Synergy select the "Use another computer's shared keyboard and mouse (client)" and then enter your Hostname as shown above. The Hostname must be correct or this won't work at all.

A successful test will clearly show a log on the Server screen showing that the Server successfully started, then when you move the mouse off of the side of your Screen and toward your second screen, if the mouse pointer jumps to the next screen, just as it does in a dual screen setup then the log will show the change too. If you move your pointer off of the edge of the screen and end up stuck on the second screen, you can always Stop the test and the mouse will return to the server screen. In that case, you made a mistake somewhere in your links. Play around with the test for a while.

When you know that the setup is working correctly, cancel the Tests on the Server Screen, then click Start and the Synergy server will start properly and the window will disappear to the system tray. Do the same on the client screen. To end it simply right click on the systray icon (lower right hand corner of your desktop) and click Quit at any time.

Every now and then you will get errors, this is often fixed for me by simply quitting the program on both screens and then starting them again. Also, if you have a great deal of data on the clipboard it might be a problem (large bitmap image for example). Try copying just a few lines of text from webpage or something to see if that fixes it.


Hopefully this guide will have helped you to setup Synergy on two or more computers to use the same keyboard, mouse and clipboard for them. If you have any problems or questions, please visit our Discussion Forums and ask for help there. Don't forget to visit the Synergy project page too and leave your own feedback (and a few dollars donation would be a nice touch too!)