CacheLogic, a world leader in Peer-to-Peer traffic management and network intelligence solutions, released a study of file formats that are used mostly in file sharing over P2P networks. Some of the conclusions found are quite surprising. Firstly we see that Video takes 61.44% of overall P2P traffic by volume (on the four major P2P networks) while audio account for 11.34%. Finally 27.22% goes to other non-audio and non-video file formats. 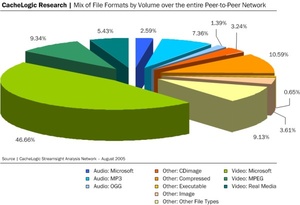 The study showed that Microsoft video formats represent 46% of aggregate worldwide Peer-to-Peer traffic. 65% of all audio files by volume of traffic are still traded in the MP3 format, but a surprising 12.3% are in the open-source Ogg file format (almost all exclusively traded on the BitTorrent network, particularly in Asia). The study also again showed that the eDonkey2000 network is the "network of choice" for video sharing.

The study also showed that BitTorrent is now increasingly being used for legitimate content distribution. The study is based not on estimates, but on actual packet data and traffic levels analyzed at Tier-One ISPs (Internet Service Providers) worldwide.

eD2K is biggest used P2P network in the world! and as far as video availability, it is still far ahead of competition. Whatever appears on the network, seems to simply stay there.

i agree, edonkey is indeed a very good network harddrive for video files.

edonkey... i say it sucks, but not a data... i can't understand why miscrosoft file format is so popular. as far as i know XviD wasn't made by microsoft.

Any video in the AVI container is considered Microsoft video in this report.

Thanks for letting me know that. Now this chart makes since. I was horrified, for a moment, thinking that WMV had the largest video chunk.

o yeah i was about to be like WTF - but that makes a lot more sense. and just because the container format is a microsoft "product" doesn't mean its Microsoft Media.