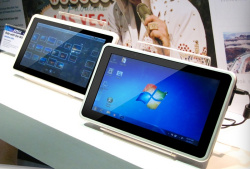 At the Consumer Electronics Show (CES), MSI Computer Corp. is showing two new tablets; one running an Android operating system and the other running Windows.
The two new generation WindPad tablets feature a stylish design and useful functions such as G-Sensor gravity detection, which apparently protects the internal hardware in case the unit is dropped. An ALS light sensor adjusts screen brightness based on surrounding light sources.

The MSI WindPad 100A tablet measures 10.1-inches, is half an inch thick at its thinnest point and weighs 1.6 pounds. It runs Android OS, powered by an ARM processor. It's features include a digital compass, GPS locator, Wi-Fi and optional 3G.

The WindPas 100A also includes USB and HDMI ports for expanding and connecting to other devices. The battery can run for right to ten hours on a single charge.

The MSI WindPad 100W tablet is much like the 100A but runs Microsoft Windows 7 Home Premium. It is equipped with an Intel Menlow Z530 processor and a 32GB SSD for storage.

Now that the ipad 2 is out everybody seems to be going for tablet pcs, not sure whether it's just a passing fashion or not...

High Quality Android Tablet PCs Direct
Comments have been disabled for this article.