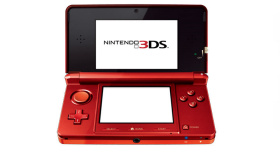 Japanese gaming firm expected to report sore losses.
Nintendo has found itself in a battle for casual gamers who are tempted by mobile gaming on other platforms. The Japanese firm has reached out to casual gamers with its Nintendo DS handheld, originally launched in 2004, and its Wii home console.

In recent years, smartphones have become portable gaming devices in their own right, and have massive catalogs of games available that would tempt a casual gamer.

To prop up its offerings for the holiday season, Nintendo has slashed the price of the 3DS handheld and is pushing out some new software titles, including 3D versions of its Super Mario franchise. In the United States, Nintendo is also offering on-demand service of movies and TV shows on the 3DS and Wii console.

Still, Nintendo will have to put up with more competition as Sony preps the PlayStation Vita for a December 17 launch in Japan, with the U.S. and Europe following early next year.

Nintendo will still fail with 3DS this holiday season.

Reason 1: At E3 Reggie stated Mario 3D can be beat solely in 2D and that 3D is only necessary if you wish to collect all bonuses. What's the freaking point? That's going to hurt Mario's software sales.

Reason 2: I have yet to try a 3D game on it where I could keep it on 3D for more than 15 minutes before my eyes start to water. The technology definitely works, but its way to hard for most people to with stand it. Okay yea we get it, the feature turns off; okay well Reggie get this, if people wanted a 2D 3DS they'd have bought any one of the many DS console line up.

Reason 3: Nintendo doesn't share the passion of this unit like they have for their other consoles. They are trying to show that they do, but when 90% of your advertising on a 3D unit goes into talking about how excellent the 2D is, you only doomed to deep criticism and potential failure.

Reason 4: Top 3rd part titles, where are they? Nearly non-existant because the system isn't selling, they are concentrating on consoles, smart phones and even Vita now. I give 3DS another year to pull a rabbit out of their hat before they no longer go in production. What a shame of a wasted technology that works.

People aren't ready for 3D and most still feel that it's unnecessary for gaming. The average gamer thinks feels that it's just a gimmick that doesn't add anything to the gaming experience. It will be $99 soon and likely discontinued.

Nintendo refuses to release software for other platforms...this will be their downfall.

The advances in smart phone gaming is also hurting them.

Nintendo refuses to release their software on their own platforms. They're morons who can't reform quickly enough.