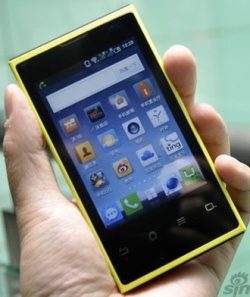 Handset runs Baidu's own operating system.
Its new Changhong H5018 is built by Foxconn, and runs Baidu's own Cloud Smart Terminal platform, which is based on Android. China has the world's largest number of smartphone users, so it is an important market for Baidu to stake its claim in. It will face serious competition from low-cost handsets made by firms such as Huawei Technologies, ZTE Corp, HTC, Lenovo and Xiaomi.

The 3.5-inch handset features a 480 x 320 screen, dual-SIM and is powered by a MTK6573 650Mhz processor. It has a 3MP rear-camera and a microSD slot for storage. China Unicom will carry the device initially.

To entice Chinese buyers to switch to its new handset, Baidu has included 100GB of cloud-storage from Wangpan, which would be the Chinese equivalent of Dropbox.

The Changhong H5018 will sell for less than 1,000 yuan ($158; £99). "It's a terrific market opportunity for us, and Baidu is constantly adjusting, understanding what users are interested in," Baidu's director of international communications, Kaiser Kuo, told BBC News.

"The new handset is integrated with the cloud - and with our 100GB offering, I think that no one will be able to match that."
Tweet
Tags: Baidu
<Android gains more market share >Report slams mobile Internet censorship in UK
Previous Next
Comments have been disabled for this article.