Dell sales down ahead of proposed buyout 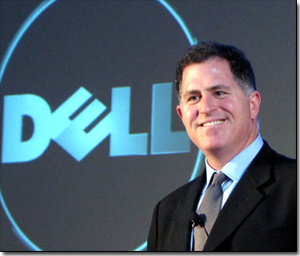 Dell Inc. reported an 11 percent fall in revenue and 31 percent drop in net profit in the recent quarter, in what could be its last reported results before it goes private
Its figures were ahead of analysts expectations, but still shows the drop in Dell's consumer business. The company reported an 11 percent drop in revenue to $14.3 billion over the quarter. Net profit dropped 31 percent compared to the same period the previous year, to $530 million.

Michael Dell, founder and CEO of Dell Inc., is proposing a buyout of the company that will take it into private ownership. He is joined by equity firm Silver Lake, and is helped with a 10-figure loan from Microsoft and financing from several major lenders.

The buyout, which would be worth $24.4 billion, is being contested by some Dell shareholders, including its largest independent shareholder, Southeastern Asset Management. Its position is that the figure grossly undervalues the company.
Tweet
Tags: Dell michael dell
<PlayStation Cloud suggested by domain registrations >Google Glass UI shown off in new video
Previous Next