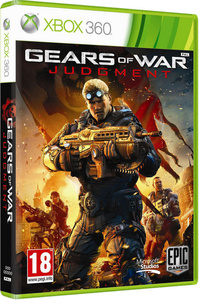 "We are aware of isolated cases in which Gears of War: Judgment content has been propped on the web and are working closely with our security teams and law enforcement to address the situation immediately," a Microsoft spokesperson told Eurogamer.

"Consumers should be aware that piracy is illegal and we take vigorous action against illegal activity related to our products and services."

Of course, playing a game that is not even out for a month on Xbox Live is just asking to be banned, so that will come as no surprise. Playing pirated copies of games is a violation of the Xbox Live Terms of Use, and will likely get a console banned from Xbox Live for good.
Tweet
Tags: Xbox 360 Gears of War: Judgment
<Hacked Google accounts down 99.7% from peak >Nokia Music+ now available in the U.S. for Lumia owners
Previous Next

I don't understand how these games get into the wild so easily pre-release.

Pirated games are the best!! M$ & s0ny can both blow each other ...
until games come back down in price (which will never happen)
I wont be spending the same amount of money on a game as i do on an 8th of good bud.. :) GO Piracy!!!! WHOOOOOAAAHHH!!

The theory goes that MS or someone close to MS leaks the game themselves. They then have an excuse to ban anyone that gets caught playing the game early, therefore meaning that person will have to buy a new console plus Live subscription if they want to get online again. So the money they lose from leaking a game is more than made up for by people having to buy new consoles/subscriptions. Not saying that's a fact, it's just one theory that gets circulated a lot.