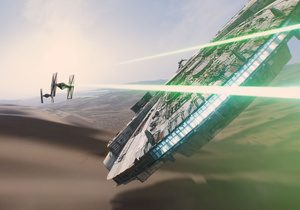 The teaser trailer for the upcoming Star Wars Episode VII - The Force Awakens has been out for a week, but the creator of the enormous franchise still hasn't watched it.
George Lucas was asked for his reaction on the teaser trailer during an interview with Page Six, when he admitted he still hasn't sat down to watch it yet. "I don't know anything about it, I haven't seen it yet," he reportedly said.

Lucas went on to explain that he avoids early footage because he enjoys going to the theater and seeing the entire movie without seeing parts of it beforehand. Lucas is credited as a creative consultant on the film, so it is unlikely he will be able to keep in the dark that much.

I wonder if Lucas will be pleased with JJ Abrams new direction for the Star Wars franchise when he does go to see it in December 2015.

Here's the teaser trailer if, like Lucas, you haven't taken the time to watch it yet.