Google Chrome to use less memory and power 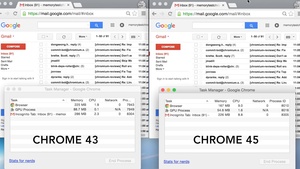 Following an update, Google's Chrome browser should use less memory and be less of a burden on battery life.
It's not exactly a secret that Google's Desktop web browser likes to consume a lot of RAM, particularly for users that tend to have a large number of tabs open. There are ways to reduce the memory usage in Chrome manually, such as using add-ons that suspend tabs after a period of inactivity, or setting plug-ins (Flash etc.) as "click to play".

With the latest updates for Chrome, Google aims to ease the burden the browser puts on a system. The browser can now aggressively clean up old, unused memory when a webpage isn't busy with a task, which Google claims reduces memory usage per website by about 10 percent on average.

For complex web apps it is even better, with tests showing that up to a quarter of memory used by the tab can be freed.

Users of the Chrome browser will also have noticed that sometimes the browser can really lock up a system when restoring tabs that were previously opened. Google has made changes to improve tab restoration too, as Chrome will now restore tabs from most to least recently viewed and can detect when the computer is running low on resources and halt tab restoration temporarily.

To reduce power consumption and save battery life, Google will also make default a previously introduced setting that pauses Flash content automatically if the Flash content is not found to be central to a website's operation. In tests, this setting has increased battery life by about 15 percent, depending on the system.

Google has promised that more such performance enhancements will be pushed out with further updates for the browser.

About time - I thought maxthon was bad for it but Chrome tops even that browser especially if you still run XP.

Chrome still doesn't have a pull down menu.I will use Chrome again once they incorporate this' until now I use Firefox.

Originally posted by mtntop1: Chrome still doesn't have a pull down menu.I will use Chrome again once they incorporate this' until now I use Firefox.

I switched to Pale Moon which is based on Firefox but easier on CPU and Memory usage.

I have also started using Fleep to send quick notes to email recipients without having to resort to any browser whatsoever.
412.9.2015 15:46
Jemborg
Send private message to this user
Senior Member

The spyware in it must be a drag on cpu power ;)

Must give PaleMoon a try. Should use the FF addons. Still enjoying Waterfox.