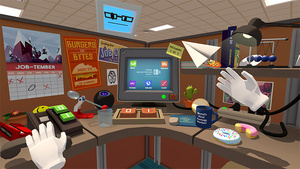 Google has added VR studio Owlchemy Labs to its portfolio, promising to continue developing engaging, immersive games on multiple platforms.
Owlchemy Labs is the developer behind the popular Jobs Simulator VR title for HTC Vive, PlayStation VR and Oculus + Touch that many considered a proof of the potential for revival of virtual reality. More recently, Owlchemy released Rick & Morty: Virtual Rick-ality, compatible with the Vive and Oculus.

Now at Google, Owlchemy promises to continue making the kind of content they are famous for.

"Owlchemy Labs makes things that are absurd, highly polished, and filled to the brim with terrible puns & jokes that we love making. We both believe that VR is the most accessible computing platform and that there's a ton of work to be done, especially with regards to natural and intuitive interactions," the acquisition announcement reads.

"Together with Google, with which we share an incredible overlap in vision, we're free to pursue raw creation and sprint toward interesting problems in these early days of VR."

Tweet
Tags: Google Owlchemy Labs
<WATCH: 'The Sims' is coming to iOS, Android >"Last Warning!" - Evil scam targeting entrepreneurs and others in Facebook
Previous Next
Comments have been disabled for this article.