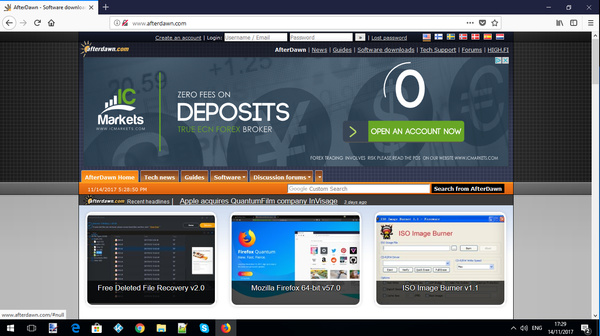 Mozilla has released Firefox Quantum across platforms with a new slick UI and an overhauled core engine, providing for a speedier and lighter experience.
It's twice as fast as Firefox from six months ago, or at least Mozilla claims, and when we tested it out we noticed significant improvements under the new Photon UI, including when switching between large numbers of open tabs. Browsing was also noticeable smoother. Quantum is also less of a memory hog.

The improved experience comes from a multitude of improvements under the hood, such as the new CSS engine, Stylo, that takes better advantage of today's hardware with multiple cores that are optimized for low power consumption.

Firefox has also changed the default search provider to Google in the United States and Canada. The decision was put down to a "focus on user experience and performance," but of course Firefox still comes with more than 60 search providers pre-installed, covering 90+ languages.

You can download Mozilla Firefox v57.0 (64-bit here) from AfterDawn or the Mozilla homepage.

Here is a video covering the Firefox Quantum update:

does anyone know if this can use noscript ... if not i will pass for now
thanks

Not sure how to add images on this but to answer your question about compatibility of 'Noscript' on Quantum...NO, NOT COMPATIBLE.

Tried this back a month or so ago in beta. Tried yesterday on 3 computers, all w/solid state HDDs.

My PCs are reference with respect to the build and configuration...period, so if the shit doesn't work on mine, you bet your asses it doesn't on others as well.

My Hp Spectre X360 Quantum works as expected. Not better than nor worse than Chrome.

My Toughbook for work was crippled by Quantum. It's garbage. I used to love and be diehard for Firefox. Now, Quantum and the prior releases use in upwards of 400MB of RAM with a single tab open, the DEFAULT TAB TOO.

My gaming rig at home with 850 Pro 512 also saw problems with Quantum. Still, any browser racking up 400 f'ing megs of RAM upon start up......of which Firefox is still slow to start initially, is unacceptable. It's a f*cking browser for crying out loud!

The link for the 64 bit tries to download Malware. I tried it three times and scanned it with two different engines. Malwarebytes and Vipre. Both pinged it once I downloaded it and scanned the downloaded file.

Thought you might want to know.
Nevertheless, luck and loot to you all.

"Courage is being scared to death, then saddling up anyway." John Wayne
416.11.2017 14:30
ivymike
Send private message to this user
Member

Firefox Quantum may be faster than the Firefox of 6 months ago but this new version renders ALOT of plugins useless >:-[

Originally posted by ivymike: Firefox Quantum may be faster than the Firefox of 6 months ago but this new version renders ALOT of plugins useless >:-[

that is why i haven't updated .. my fav is noscript ... THEN i will wait another month to let all the bugs get fixed ..