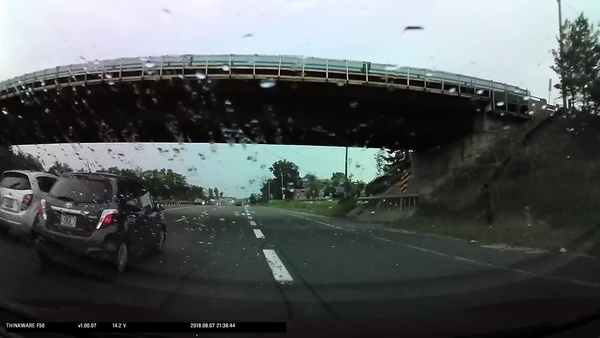 A Tesla Model 3 owner has uploaded dashcam footage to YouTube showing the moment where he claims the car's autopilot system saved his life.
YouTube user 'Tesla Canuck' was driving home when he was almost involved in an incident due to the behavior of another driver on the road. He explains that he was driving in the right lane when another car a much higher rate of speed tried to squeeze in between his car, and the car in the left lane.

Tesla's Autopilot system detected the imminment collision and took evasive action to avoid the other car, while it was driving along at around 102km/h.

The all-electric carmaker has been the subject of headlines for many reasons in recent times. Some of those reasons have been negative as unfortunate incidents of the autopilot being involved in accidents or failing to prevent them have been reported. Typically, when the autopilot system prevents an accident, it doesn't make news.

In this case, the YouTuber was recording with a dashcam at the time and posted the video to show the close call. He claims that the Autopilot system saved his life, and given how quickly the car's automatic system reacted, he could absolutely be correct.

Give it a watch:

While dangerous, the other car was through before the tesla swerves right.

That's handy to know I can pull in front of a Tesla and it won't hit me.

“In a 52-48 referendum this would be unfinished business by a long way. If the remain campaign win two-thirds to one-third that ends it.”

Nigel Farage, Daily Mirror, 16.05.16
Comments have been disabled for this article.