Recent headlines | Google, Spotify and many other major websites are all down across the globe 5
AfterDawn > Guides > How to Edit MP3 Audio


You may think of MP3 audio as always being in an MP3 file. In reality these are elementary audio streams that also be put into other containers without losing any information. By putting multiple streams in a container such as Matroska so that they play back one at a time with no gap between you join them. These new files can be kept as is and played by many programs. If your playback software or hardware doesn't recognize MKA or MKV files you can extract the joined MP3 streams as a single elementary (MP3) file when you're done.


Matroska is the name for an open source universal multimedia container1. What this means in simple terms is that you can use it to store nearly any type of audio, video, or images. You may have run across Matroska video files, which typically have an extension of .MKV. This guide will show you how to make audio-only files, which will have an extension of .MKA instead. In reality the extension isn't important and you can stick with MKV if you want. You can also use this technique to combine audio streams from multiple video files into one Matroska file if you want to reassemble a movie you've split across 2 or more CDs.


Joining two or more MP3 files is as simple as creating a new MKA (or MKV) file and using multiple MP3 files as the source. Use the Add button to add the first MP3 file and then the Append button for each subsequent file you want to add to the end. The Output File Name at the bottom determines where the new MKA (Matroska Audio) file will be saved and what it will be named. Click the Start Muxing button when you have all your source MP3s appended. 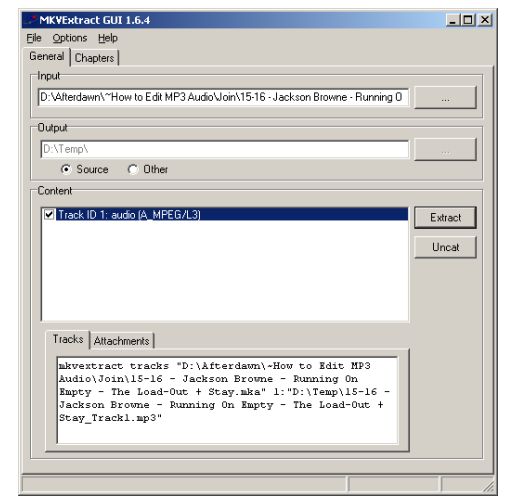 
If you just need to play your MP3 using a computer you should be able to keep it in MKA containers1. Alternatively you can extract it to a MP3 file. To do this you simply need to use MKVextractGUI. Simply load the Input File using the button to the right and either select a destination folder or have the output written to the folder where the original MKA file is located. Then check the box next to the audio track and click the Extractbutton.

When it finishes you'll have a single MP3 file.