Today we will unbox the new launched Microsoft Zune HD media player as well as review the brand new Zune software, version 4. We will go through all the aspects of the player and the software and its tight integration. The player marks the third hardware revision of the Zune line, and by far its best. The player notably features a beautiful OLED touchscreen, HD radio, the NVIDIA Tegra HD video playback engine and Wi-Fi sync.

The first page will review the new Zune 4 software, with the subsequent pages reviewing the actual player. Feel free to start on whichever page you want. We will also compare the hardware and software to the market leader, the iPod Touch. 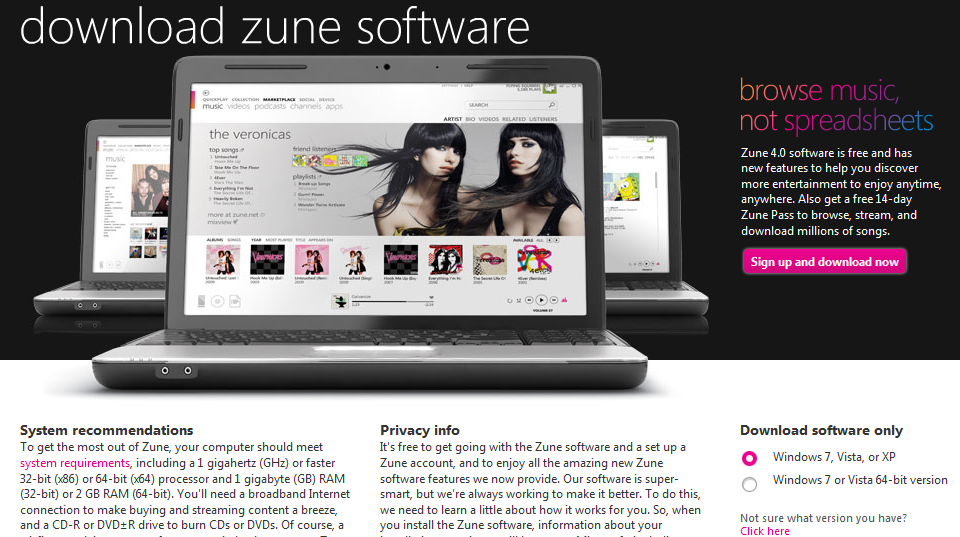 From an overall standpoint the Zune software is fairly straightforward to use, and aesthetically I truly believe it puts other syncing software such as iTunes to shame. Also included for the first time is a "mini player," a way to keep the playback in a smaller mode yet still with most options. You can also pin the player to your taskbar for easier access, like with most playback software.

For the time being however, you NEED the Zune software to use your Zune HD, as it will not sync with any third-party media player or even Microsoft's own Windows Media Player 11, somewhat surprisingly. The software also adds "quickplay," "pinning," and Smart DJ. Smart DJ is the most notable, with the feature creating playlists from your favorite artists, using your own library, any music on your Zune HD and the Zune Marketplace. If you don't own the songs, then they will be "suggested," implying you should purchase them from the Zune Marketplace or get them however you choose.

Quickplay allows you to "pin" six pieces of content (music or video) as sort of an easy access to your favorites. You can also easily access recently played media.

Of course, you will be able to sync your Zune HD using the software and the initial steps of the setup when you first connect the player will help you walkthrough the different options of what you want to sync, etc. 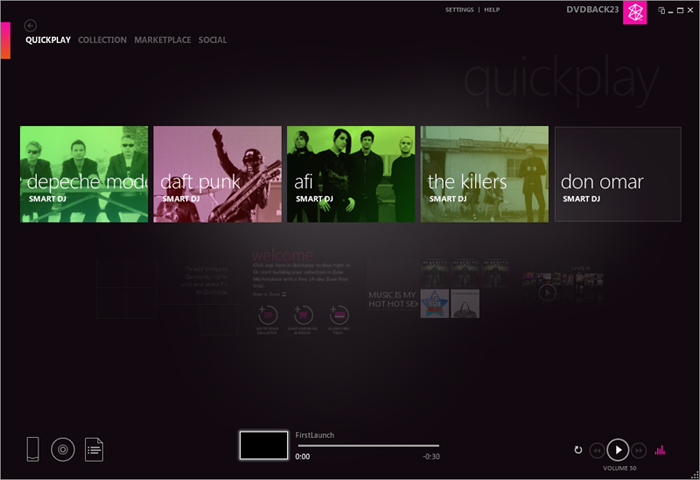 Quickplay gives fast access to Smart DJ, your recent history, and your recently added music and videos. You can select five favorite artists, for easier access to Smart DJ playlists later. The Quickplay page is somewhat of your frontpage, a portal to all the other aspects of the software. 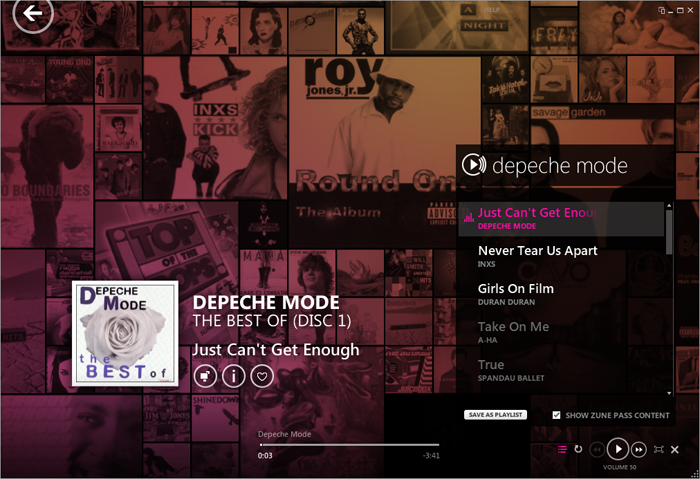 After creating a Smart DJ playlist (I normally do so through the quickplay page) you will see a screen similar to the one above. You will have the actual playlist on the right side, with all songs you own already playable and with "suggested" tracks grayed out, as stated before. The background will be a collage of your album art. You can then save your playlist for later as well as rate or switch to "mix view." You can also get more info on the album or the artist by hitting the "i" button, as well as see what other tracks you have as part of the album. If you don't own them, the software will obviously tell you to head over to the Zune Marketplace and buy a Pass to buy them. 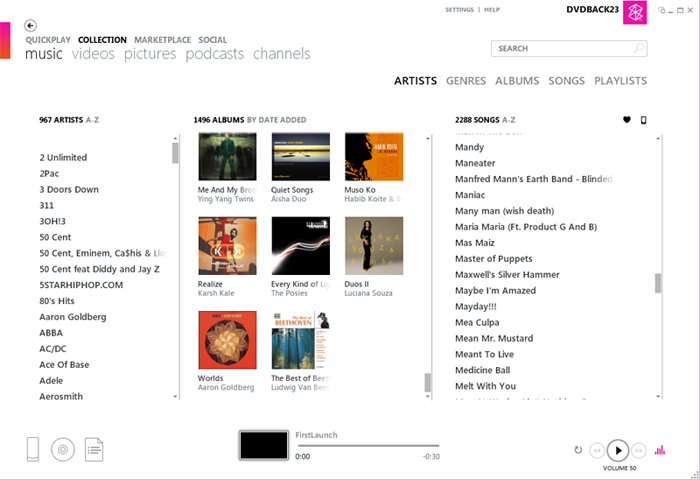 The "Collection" section is simply that, a collection of your music, videos, podcasts and pictures. Aesthetically, just like the rest of the software, it's very nice. Scroll by artist, album or track and play the music. Simple as that. Same goes for podcasts, pics and vids. Video playback of many different codecs is good as well. 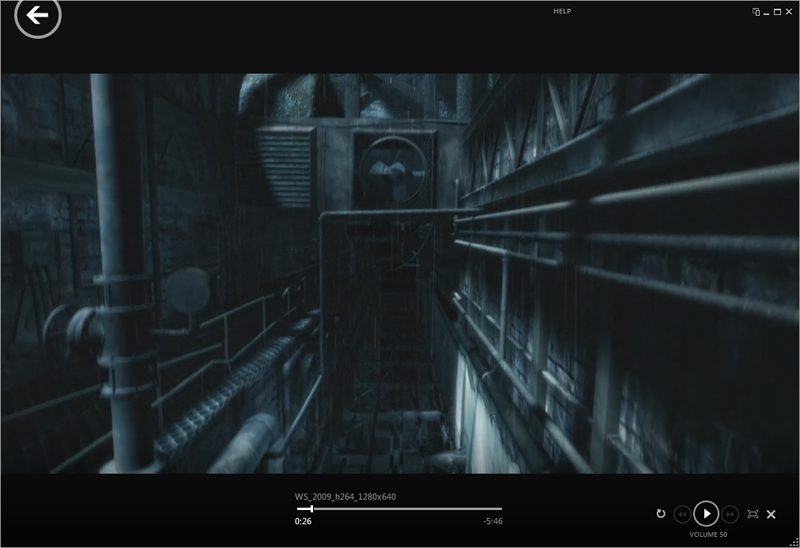 The video playback is straightforward, just as with iTunes etc. 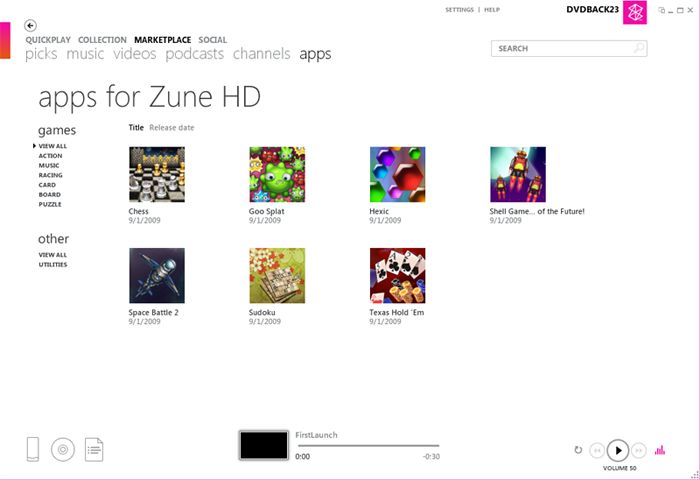 The new edition that comes in version 4, is the addition of the app store for the Zune HD. However, at this point, there are little games, and even fewer apps. I downloaded the calculator for my Zune HD and will update when more are available. Microsoft has already announced that all the apps will be free, and all will be written by Microsoft, or at least under the supervision of the Redmond giant. Announced so far are Twitter, Facebook and a few more games. They are expected within a month.

There are hints however that Microsoft is looking to extend their development to third parties, especially given the launch of the XNA Games Studio 3.1 Zune Extensions APIs. 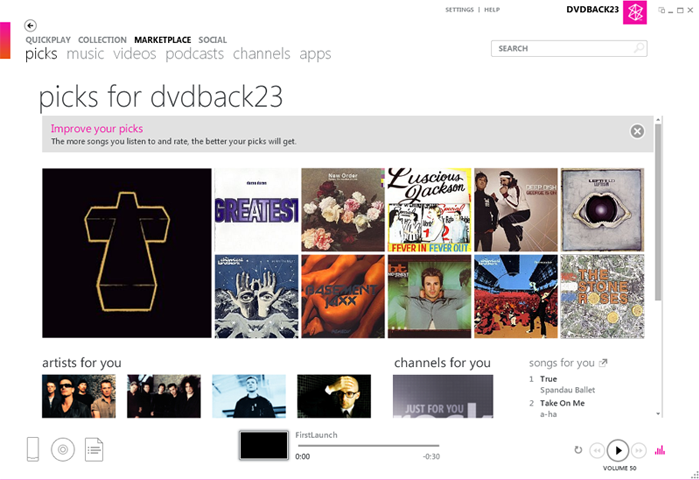 The Zune Marketplace has been rehauled as well, and now has better recommendations and an easier interface. You can browse for music, videos, apps, podcasts to purchase or download for free when available.

The Zune Marketplace, as can be expected however, has its flaws. There is a small amount of movies, less music than iTunes, and the payment plans are in Microsoft Points, points that NEVER add up to what you need them to, allowing the company to pocket the extra wasted points. Regardless, the HD in Zune HD means you can download 720p content for playback on your TV using the $90 AV Dock (not included of course). There are only about 500 movies available.


All that remains from the software is the Social aspect, which I have not fully explored but seems exactly like past editions. Join up with friends and chat. Sign in using your hotmail/live/bing account or with a new email.