This guide explains how to 'manually' install/upgrade harddrives in the xbox. Some quick notes:

Make sure harddrive jumpers are set to Master/Primary

Backing up the your factory hard drive onto your PC

First we will want to do a backup with the Evolution X dashboard. Go into the System Utils Folder, then choose Backup.

This will create a new folder, Backup, in the C: folder of the Xbox. Make sure there are these files there. There should be 5 files in there (see pic):


Now we want to make sure we do a full backup of the factory xbox's harddrive. We want to copy the C folder and the E folder on the XBOX. FTP into your xbox with FlashFXP and copy those two folders to your PC's hard drive. 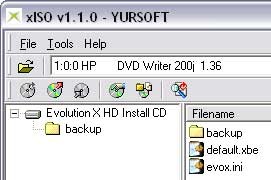 Once you finish copying the files. We can create a custom HD install CD. I made a evox.ini file to do this: Just rename it to: evox.ini and adjust the network settings to what you had setup before

Then Copy the Evolution X Dashboard file (default.xbe) we made the boot cd from and paste it to a new folder. Copy the new evox.ini file that contains the HD Format commands and also the Backup folder from the xbox's C: folder into that same folder. So we'll have a folder that looks like this (see pic)

Then burn this image on a CD-RW. 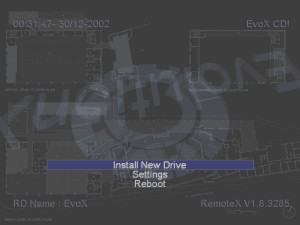 After you get your Xbox together boot up the new CD-RW we made. It should bring up the Evolution X dashboard and look like this (if you used the .ini file i made and posted, see pic)

Click on Install New Drive and let your xbox do its thing.

Once it finishes boot your original evolution x dashboard CD-RW you made. We'll just need to reinstall the c and e folders we backed up.


Open FlashFXP and connect to your Xbox. Once you get connected, we'll want to copy the C folder and the E folder we backed up earlier. Once you finish copying the files we'll talk about the new F: Folder we can use!

We'll need to edit your evolution x dashboard settings or the evox.ini file on the xbox so it uses the F Drive.

The F Drive is the largest drive on your Xbox. Its the best place to save your games and programs and music to. Its very same method as you did with the factory drive, except we put the folders on the F: Folder on the Xbox. Just point your links to the F: instead of the E:

Depending on the size of your new hard drive you can now store tens of gigabytes of material on your Xbox -- anything from game backups and "homebrew" games to music and movies.

Please visit our Xbox forums if you have any comments or questions regarding this guide.