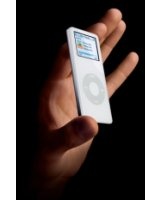 When it appears there are defects in an Apple product, even if they are minuscule, it seems they are widely reported more so than most other electronic products. As proof, a thread on Apple's discussion forums has made several tech sites and blogs. Specifically, users are complaining about whining sounds coming from their 2G Nano models (and have been doing so for some time). The claims about how loud or invasive the sound is vary by user.
It seems to cover all 2GB, 4GB and 8GB models and none of the reports mention the sound coming from previous generation models. This has lead some to speculate that the noise is caused by a new component. Engadget decided to test it out with a 2GB model but could only hear a whining sound literally if the player was right beside their ears.

One owner, russgra, claims that the noise is the first thing he noticed when he got his 8GB Nano, whereas Energie said he would not have noticed if he didn't see the problem mentioned in the forums. This makes you wonder how many people have an actual "problem" with their model and how many are just unnecessarily whining.

I think the title was supposed to say: "Nanos complain of whining Ipod users."

no. the tittle is peferctly normal. the ipods are making sounds that sounds like whining

I'm pretty sure hard drives make some noise when being accessed. But its pretty annoying to have a whining noise occur when my nano is pressed up against my head, because what else would I be doing with my nano, Maybe listening to music?

"when my nano is pressed up against my head" Err? The headphone cable is HOW long? I don't think having it pinned to your ears would ever be necessary ;).

I believe the whining noise is caused by the screen, or more precisly, the backlight. I have a (quite old now) kameleon remote which makes an almost identical noise when it's backlight is on, obviously I can only hear it with it right next to my ear so I don't complain. Both my 1st gen 4GB White Nano and 2nd Gen 8GB Black Nano make the noise, I don't care though. This is just my thoughts, so I could be completely wrong though :P I do have a 40GB Ipod Photo which dosn't make the noise though.