Big three in games get sued for their controllers 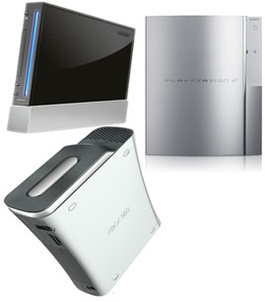 Pathological lawsuit junky firm Fenner Investments out of Richardson Texas is at it again. Fenner was once made slightly famous for their claims against such companies as Alcatel, Cisco and Nokia in saying each firm violated Fenner's copyrights by stealing their "method and aparatus for managing a communications network for mobile users". All proceedings of those lawsuit attempts were either lost or thrown out of court. It seems like now, Fenner is upset with a certain trio of game console developers.
Nintendo, Microsoft and Sony have all become the latest target for Fenner Investements. Fenner now claims that the controllers used on each of the three company's designs utilize a method that was patented by their company some time ago. Taken in part from the court document, the claim states the following patented method was infringed upon. "The joystick port interface includes an integrated circuit receiving an analog joystick position measurement signal and outputting a digital pulse signal to a processor which signifies a joystick coordinate value. The integrated circuit includes a pulse generator and a bidirectional buffer circuit. The bidirectional buffer circuit receives the analog joystick position measurement signal and selectively discharges an RC network capacitor which provides this analog measurement. This implementation provides a joystick port which uses low-voltage CMOS VLSI structures which can interface a conventional high-voltage joystick with the processor."

If you're now rubbing your head on that description, it basically says that the action of pressing a button on a controller to send a signal to the game unit is a patented method. So, everytime a gamer presses a button on their gaming system, they are helping the big developers infringe upon Fenner's rights.

Pleading with the court system, Fenner issued this, "Each of the Defendants’ acts of infringement has caused damage to Fenner, and Fenner is entitled to recover from each Defendant the damages sustained by Fenner as a result of their individual wrongful acts in an amount subject to proof at trial. Each of the Defendants’ infringement of Fenner’s exclusive rights under the ‘751 Patent will continue to damage Fenner’s business, causing irreparable harm, for which there is no adequate remedy at law, unless it is enjoined by this Court."

If this is taken literally, I can only imagine how many "button mashing" games will be brought into question. If the lawsuit is rewarded for a certain amount per infraction, its hard to see how any of the three companies would be allowed to remain in business. No statements have been made by any of the console giants as of yet.

Source:
Playfuls
Tweet
<Blu-Ray to be copied to media devices >Industry leaders discuss the future of DRM
Previous Next

US patent laws are a joke... btw, I just applied to patent number 7.754.426, "Method for Replying to Dumb Patent Suits", which, in simple words says "close your hand, choice of right or left, finger tips pressed against palm, extend middle finger and show hand to the lawyers who filed the suit"... I´ll get rich...

Come on this is just going too far. Fenner is just trying to find more ways to make fast money and hurt the consumer.

for every time I pressed a button on my 360 controller, I infringed on copyrights?! ok, so every movie I ever paid to see at the movie theatre, I should get to own it right? I paid 8 bucks to see it, so why can't I download it? But i will get hit with the lawsuits and crap, this guy just makes crap up. I love cheese, so I thought why not make it so you can have it anywhere? i'm suing Kraft for my idea of Easy Cheese

this is ridiculous, this just goes to show how desperate some companies get to make some money. You know what, Im going to make an invention of my own, itll be a metal box with a spining plate inside that you can use to warm up food... Ill call it a microwave. Peace Out!

Does anyone else recall the 'turtle beach' suit a while back? They went after the big three over rumble tech. Nintendo paid them off, M$ paid them off, and bought most of their shares, and Sony decided to actually go to court, which had their PS2's in and out of production for nearly two years. It's just plain stupid that these things go on; but frankly, it's not worth it for the big corporations to fight it. It's better for them, as shown by Sony, when they settle these things, and get them out of the way. But hey, maybe Sony will fight this in court too; then maybe they'd finally go under. Given their recent track record over the last year, that wouldn't surprise me a bit.

This is the best news for Fenner. Now after they win this lawsuit, they can sue the company who produced the "Remote Control". I mean how many times have people violated their patient everytime they changed the channel on their tv, or how about opening the garage door. What about the very old nintendo controller that looked like a triangle from the NES days? Will they sue that too? Then they need to sue the wireless mouse and wireless keyboard, god only knows how many gamers use those.

lol; there are a lot of companies just sitting on huge patents like that. In most cases, they didn't really invent said thing; but nobody questioned the patent when they got it, so it's legal. Which seems like a more than slightly flawed system, but what can you do?

The amusing thing though; big industry companies like M$, the Big N and $ony have large policies to protect them from things like this. My curiosity is, when they get sued, do they pay out, or do a group of insurers pay out? It's interesting stuff, when you consider it. Wouldnt this go back too the first games you smashed a button on like say atari with its one button controller you smashed it so then nintendo so that means they had this pantent over 20 years and have not done anything.

This isn't about button pushing, its about the analog joystick. I guess the writers of this article are about as sloppy as the lawyers of Fenner. The method of using the pot to set the timing of a pulse generator has been used since the advent of the PC joystick. Fenner's going after this because they see deep pockets and an easy troll for a fat out of court settlement. It won't go anywhere. Maybe they should stick to chasing ambulances or filing class action lawsuits.

Its disgusting how Fenner thinks they can just sue someone for a quick buck... I hope it gets thrown out of court its just so silly.

There's nothing "sloppy" about the article. Had you read the description and interpreted the scope of the patent, it covers analog position making a connection and sending a low voltage digital signal to a processor. The term "joystick" is a general term used to describe the low voltage interface. The action of a button push is simply one example of what might be interpreted as an analog input which converts to a digital signal. Any movement issued by the user of said "joystick" is an analog measurement. The contact of the button, gyroscope or positioning device made to the circuit board to produce the low voltage signal instructing the processor of what changes have been made are what's claimed to be patented.

what i want to know is how is has damaged them. they really don't see the big picture what they need to do is sue god for making the world, I'm sure they have a patent on that one.

Davedough, A "button push" is an on-off control signal (switch closure). That is the method used on the old Atari 2600 joysticks and the Original NES system. There is no analog position sensing, it is either on or off. This suit is about the analog position measurement method first used on the old Kraft PC joysticks and in use inside Radio Controlled Airplane controllers. Of course there's no big bucks there so there is no use suing those folks. I don't want to get into a spitting contest about this since we pretty much all agree that these jerks will sue anyone with big pockets and its too bad there is nothing in our justice system to impose penalties for frivolous lawsuits.

I DONT EVEN LIKE SONY AND I DONT THINK THEY DESERVE this.

Welcome to insanity and irrelevancy at its finest! It's like me suing everyone who owns a computer because I invented the 'on' button and the sound it makes when you press it! They should be laughed out of court and be forced into bankruptcy by paying the legal bills of the 'big 3'

All this for pressing buttons... My question is Who is Ferner??

I don't know how many other companies he could go after with this lawsuit. According to his patent, if he is stating it correctly, it's only for wireless controllers that use joysticks. He's so dumb, God I hate this man.

Jeez, telling by this story, it seems Fenner thinks he owns everything. I play video games myself(like almost everybody here) and I don't see it as copyright infringement each time I press a button on my controllers. Sueing a company for that is just ridiculous!

A Tempest in a teapot.

Hi, In 1955 I used joysticks on a shipboard gun fire control radar scope. Who knows how many circuits and doodads were patented under the aegis of governmental research and contract before and after? I suppose those yokels will next claim possession of the original patent on electrons.