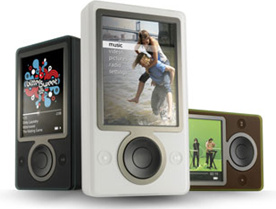 According to the website ZuneScene, Microsoft is preparing the second generation model of their Zune media player and have dubbed the model "Scorpio". There will also be a new flash memory based Zune codenamed "Draco".
According to the website, Scorpio will have an 80GB harddrive and will enter production at the end of July. That could mean that both new Zunes might be available for the upcoming holiday rush.

A few weeks ago, Microsoft announced that they expected to hit 1 million devices sold by the end of the month and that they were very pleased with the sales.

More updates as they become available.

Source:
BetaNews
Tweet
<Netflix and Blockbuster settle over patent suits >WiiWare will allow anyone to create their own Wii games
Previous Next

i hope the new zunes will have the Halo 3 skins

I cant wait,I was ging to buy the current one but i'll wait for this one:)

Quote:According to the website, Scorpio will have an 80GB harddrive and will enter production at the end of July.

This is more like it. It will be able to handle heavy amounts of data.
427.6.2007 18:48
PeaInAPod
Send private message to this user
AfterDawn Addict

I see another microsoft flop coming up. Cool Name=Bad Product.

It'd be nice if they'd keep alot of their code names because "Zune" doesn't really have instant hit/seller written all over it. "Scorpio", now that sounds sounds like a device I'd like to purchase...not "Zune". The Zune is a nice device though..I played with my bros and I like it.

i have a zune and i am very happy with it. yes some of thier products(vista) dont meet expectations but the zune is great player. i would like to get the new zune but i already have one.
728.6.2007 03:23
Erickix
Send private message to this user
Member

So yea, im glad they are coming out with a bigger HD for the zune, il defiantly pick up this one. (I hate itunes)

But for all of you are saying Vista is crap, i know this isn't the thread but seriously its not as bad as you might think. I upgraded my PC from XP to Vista and once i got a kick ass video card the machine ran without a problem. Runs [i]better[/i. Sure it might seem like just a facelift, but its much more stable too. Either way, this is to talk about the Zune, which in my opinion is better than Ipod because it doesn't require me to get itunes ><

This will bring them up to speed.. Then one more generation and they will be better than apple.. (maybe not in popularity, but definitely in quality).

Do you ever get the feeling that Microsoft pays people to submit posts to sites like this, with positive spins? I've used Vista as well, and the user experience was dreadful.

What still cracks me up is that MS obviously tried so hard to make the Zune look like an iPod.

i dont have a zune but i was going to buy one. i think ill wait or this one though. how could say that Microsoft tried to bite of the ipod. i have an ipod and i used the zune and i personally think the zune is better (video quality is much better and so is the sound) and lets not talk abt the screen (big screen and not so easy to scratch especially with a case)

Funny how this article was written before the release of Harry Potter 7. Draco Malfoy has a son named Scorpio....

the zune has the wifi spec, is it meant for zune to zune sharing only or does it have something like a browser?