At this week's CommunicAsia technology expo, the popular Japanese TV broadcaster NHK unveiled a projection system that implements Super Hi-Vision (SHV) technology, and has resolution of 7680x4320, four times the resolution of current 1080p technology (1920x1080)
The demonstration, which took place in Singapore, showed the screen measuring about 300 inches diagonally, or 6.6 x 3.7 meters. The broadcaster used two LCOS projectors, each rated at 8000 lumens as well as a 33-megapixel sensor.

As a demonstration, NHK showed off images it had recorded with an 8k studio camera. To make the demo even more impressive, the broadcaster used a 22.2 channel sound system for the audio.

NHK, which began working on the technology in 2002, believes the technology, in 10 years when it is small enough to be commercial, will succeed current HDTV technology. 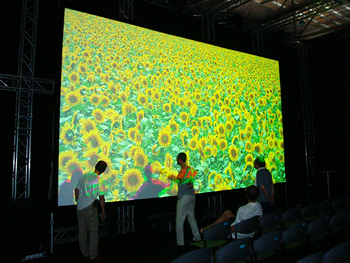 i can't w8 to be watching debbie does dallas on this baby!

hmm...it took them almost 7 years to make it 300 inches big..i wonder if 10 years will be enough to make it 6 times smaller and still keep the resolution

Originally posted by nobrainer: i can't w8 to be watching debbie does dallas on this baby!

Nobrainer..............are you a Brit? If so, are you the typical Brit with a dry, unfunny and lame sense of humor? That link to youtube just saddened me to no end.

The British are like women when it comes to comedy.................THEY JUST DON'T MIX because neither are EVER funny! HA HA HA
Comments have been disabled for this article.