Apple, speaking at their "Rock n' Roll" live event today, introduced iTunes 9 and with it, a plethora of new features.
The first addition is that of Genius mixes. Apple CEO Steve Jobs explains that the Genius library now has 27 million libraries built from 54 billion analyzed tracks, which will create Genius Mixes, personal radio stations similar to Pandora.

The Genius also works for movies and even applications you have downloaded from the iTunes store.

The second improvement was improved Syncing, as Apple says, for when "you sync to your iPod Touch or iPhone we have made that much better." Users can now choose select playlists, artists, genres, and photos from certain events, certain albums or even photos that only include certain faces. Movies have been give a "recently added" and you can manually choose favorites.

Additionally, Home Sharing makes it easy for users to sync an iTunes library between up to 5 computers in a house. All authorized computers can share music, movies and TV shows between them, and will be viewed as part of a shared group where users can drag and drop content from one library to another.

The next feature is iTunes LP. All the artist pages have been given more visual material as well photos, liner notes and essays. iTunes Extra allows users to check extra content on DVDs and Blu-rays.

Finally is the App Management page which allows users to virtually arrange all the apps, while seeing a preview of how your iPhone home screen will look. You can also easily search for your applications, good for those that have tens or even hundreds of apps.

"iTunes 9 is a great iTunes release, with innovative features that make using iTunes better than ever and iTunes content richer than ever," added Steve Jobs. "iTunes LP, for example, lets artists share more of their creativity with fans and gives music lovers the feeling of being immersed in an entire album with art, lyrics, liner notes, photos and videos."

So far at the event, Apple has also announced they have sold 30 million iPhones, served 1.8 billion Apps, and sold 8.5 billion songs through iTunes.

Apple also announced the iPod market share is at 73.8 percent, 225 million iPods sold, and that there are more games for Touch than PSP & NDS. 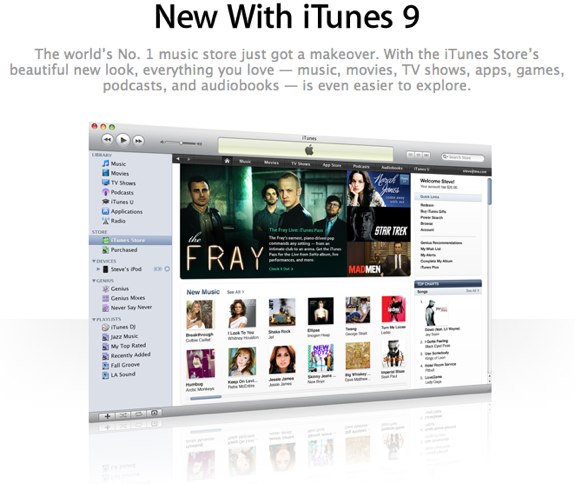 What should us jailbreakers do????

The 3.1 OS is out now too. I'll wait and see what the draw backs are with this update for both Itunes 9 and firmware 3.1

I hate iTunes updates. Because every time i do like adware or a virus it automatically makes Quicktime my default video player and hijacks all my media. And then i have to work my ass off to get everything back to what i want. That pisses me off, if i wanted quicktime to be my default media player i will pick it, they don't have the right to hijack your machine like that. So no more updates for me.

The updates seem fine as far as they go, but what I really want is a no brainer/automatic creation/synching of my library of lossless music for serious listening at home and my aac library for my iPod classic. I have 600 gb of lossless and Mr Jobs it is a total pain converting and maintaining two libraries. Surely it cant be that difficult to have iTunes automatically update an aac library as tracks are added to my lossless one and a single click to swap between them for synching with the iPod? Native support for more lossless codecs would be nice too. I am pleased to see the return of the 160gb iPod though. I would be even more pleased to see a 1tb one! Then I could carry my whole music collection in CD quality wherever I go, and have only one library to maintain and have no converting chores to do.