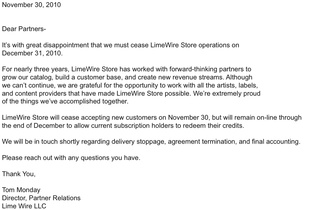 LimeWire, once the world's most popular P2P client, was officially shut down last month, following a four-year legal battle against the record industry.
A New York federal court issued a permanent injunction against the site, ruling that LimeWire caused a "massive scale of infringement" by intentionally giving users a platform to share millions of unauthorized music tracks.

At its peak, LimeWire was seeing 50 million monthly users.

Today, the company has sent out a memo scrapping their longstanding plans to open a new legal music download store, meaning there is literally nothing left of the company.

The current LimeWire store will also shut on December 31st, and the company will not accept any new payments, effective immediately.
Tweet
Tags: Limewire
<Amazon to invest $175 million in LivingSocial >Netflix to pay $100,000 per episode to play in-season TV shows?
Previous Next

Aww.. and not even a single comment until now. Sad.. ViralWire is done with :(

Use frostwire software then, same as limewire but from a different company

I assume the software still works.

Originally posted by Mez: I assume the software still works.

That's very true.. I was just playing on the joke. Tbh I think you're right.. I never experienced viruses since I never downloaded film files that were 33kb.. -.-
Viruses are, as with pretty much most things these days - user-faulted.

And I found with updates, specific songs were getting harder to find anyway. So really Google's my solution!

I haven't use LW in a very long time. When I did I didn't get any virus. I didn't DL anything that didn't have a BR and the file size didn't roughly conform to the length x BR. A few years back there was a member that used to share bot net apps with an mp3 file extension. As she said only a moron would have DLed something way too big to be a tune with no br or time posted. She was trolling for total morons which are gold in her business.

I just get angry when people blame in animate objects for what someone uses them for. I feel the same way about guns. Guns don't kill people people kill people.

its not just limewire its the internet in general.I swear for every person that uploads a malware free file theres a few hundred people thats are looking at ways to infect that file and distribute the infection.There should be a law that anyone that intentionally uploads any form of malware should be jailed or at least have to replace all the data lost or damaged from it.