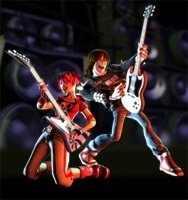 Activision has announced this morning that the once popular 'Guitar Hero' franchise is finished, with the company "disbanding Activision Publishing's Guitar Hero business unit."
The developer has also stopped all development on the upcoming untitled 2011 Guitar Hero game.

Activision cited a continued decline in interest, across the board, for music genre games.

Although the franchise is now dead, the company did add that the brand would be "re-assessed" if need be, in the future, leaving the chance of a revival if demand returns.

Although unconfirmed, there is also a rumor that DJ Hero will be dropped by Activision, as well, likely after the release of DJ Hero 3D for the Nintendo 3DS.
Tweet
Tags: Guitar Hero console activision gaming
<iPad 3 coming in the fall, says John Gruber >HP unveils Pre 3 and Veer with WebOS
Previous Next

Sad to me considering Rock Band song list is terrible, the GUI is terrible, the blurry graphics concept is so incredibly lame. Rock Band also makes songs more difficult; you cannot really have fun with the game, it's more technical. Not what I'm looking for when I play a music game.

I know Harmonix left Activision. That might've been a good thing! I still play GH3 every time I do a 'GH session' and I love the latest one too. I hope the buyers of the brand can do something with it, but I have no real high hopes.

Also, getting technical about the 2 series:
- Rock Band lacks High Speed x5, this makes the experience almost unbearable for the tougher songs

It looks like button guitar is going away; both of the big players have left the market. Can't say I will miss either; but I am sure there are a few people who are disappointed that their favorite song was never a DLC on any of the many, many such releases over the past few years.

Over-saturation killed off these games. It was so many Guitar Hero games that people just lost track of them and lost interest.

My guess is that Guitar Hero & such will evolve into something that resembles SingStar franchise nowadays -- you simply need to release one game and let people buy the extra tracks using PSN / Xbox Live. No need to build new packages of songs.

Even with current games, the problem has always been that most of the tracks on the particular game you purchased, were something you didn't want. Thus, it makes more sense to buy the guitar and "blank game" and buy tracks one by one online.

Not when they can't even give us a decent preview on the interface, dRD. I want to see how the notes are, what the song sounds like etc. A 30-sec preview would suffice. If they can spend 50 million+ on creating the game, they can surely make these video previews.

Originally posted by dRD: My guess is that Guitar Hero & such will evolve into something that resembles SingStar franchise nowadays -- you simply need to release one game and let people buy the extra tracks using PSN / Xbox Live. No need to build new packages of songs.

Even with current games, the problem has always been that most of the tracks on the particular game you purchased, were something you didn't want. Thus, it makes more sense to buy the guitar and "blank game" and buy tracks one by one online.

They've had that for years, since GHWT and RB1 were first released. Personally I welcomed Rock Band coming onto the scene by turning guitar hero from a primarily one man game into a group effort, that revolutionised it for me. I also welcome RB3 for its keyboard input. The rest, egh, personally I find the guitar hero interface far worse, the calibration system much less accurate, and the setlists comparatively lacking in many cases. Each to their own, but RB has been the better franchise to me right from the off, and the fact that they haven't saturated the market with dozens of titles also helps. Consolidation has been necessary for some time now but I wouldn't want to see the genre die out altogether.

Guitar Hero was always frustrating to me because not enough extreme music was presented... of course, many Earache bands had a few songs released, and of course there was the whole "metallica" edition, which was NICE to see the egotistical cock-rock stars humble themselves and include the ORIGINAL versions of songs they covered, like tunes by Budgie, Motorhead and the ever immortal Diamond Head (who, it has to be said, were it not for Diamond Head there probably WOULD BE no Metallica. Diamond Head was part of the New Wave Of British Heavy Metal movement that started about 1979 and actually spawned bands like Iron Maiden, Judas Priest, Venom, Saxon, Def Leppard, and a TON of others that contributed very few releases and then fell by the wayside, like Goldsmith, Triarchy, Legend, Warrior, etc...)

I did an interview with the Earache thrash band Evile, and they stated that THEY could not even master a song as it was presented on Guitar Hero... AND THEY WROTE THE DAMN THING!!! Of course, it's fast and it's thrashy, but still.....

Vibrations of Doom Magazine
The world's oldest and longest running online music magazine.
http://vibrationsofdoom.com
Comments have been disabled for this article.