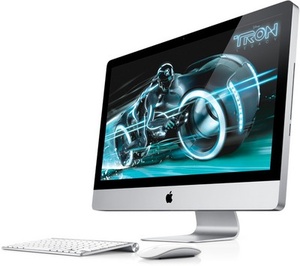 Apple has introduced the refreshed line of iMacs this week, running on quad-core processors, adding a built-in HD webcam for FaceTime and Intel's new Thunderbolt interface.
The new computers will be available as 21.5-inch (1920x1080 resolution) or 27-inch (2560x1440), and each are LED-backlit.

It is amazing how much people will pay for an economy laptop just because it is made by apple and it isn't portable.

Originally posted by lissenup7: I think most would agree that Macs and Apple products (computers at least) are designed for the techno morons. Self healing, relatively basic and meant for old people, very young children and fucking retards. Somehow though........people continue to think "it's cool" to have one. .......NOT

What's so bad about keeping it simple? You forgot about the people who would rather have something that looks nice and is relatively small/thin compared to some big box unit that takes up their entire desk. Maybe thats why they choose to buy apple products.
75.5.2011 15:46
Interestx
Send private message to this user
Senior Member

I suppose if you work in publishing or in professional audio work they make sense but to me Apple's stuff has always seemed a terrible cost/spec deal compared to a desktop PC
(and I hide my tower under a desk along with my printer, so I have to have some space for that stuff anways, leaving me with only a thin flat panel monitor showing so the size point means nothing to me).

Horses for courses I guess.